The Ethereum price continued to drop during the current session, as buyers looked to push ETH below $2700. ETH had registered an increase of 1.85% on Tuesday and moved to $2977. However, the price fell back in the red on Wednesday, registering a fall of 0.93% and then falling by nearly 4% on Thursday, slipping below the 50-day SMA and dropping to $2835. ETH continued to drop during the ongoing session and is currently below the 20-day SMA at $2720.

The Ethereum price started the previous week in the red, dropping by nearly 2% on Monday and falling to $2569. ETH recovered on Tuesday, pushing up by 2.66% and moving to $2638 before dropping back on Wednesday, falling by over 2% and settling at $2580. ETH recovered on Thursday, rising by 0.70% after a highly volatile session, before surging by nearly 7% and moving to $2769 on Friday. 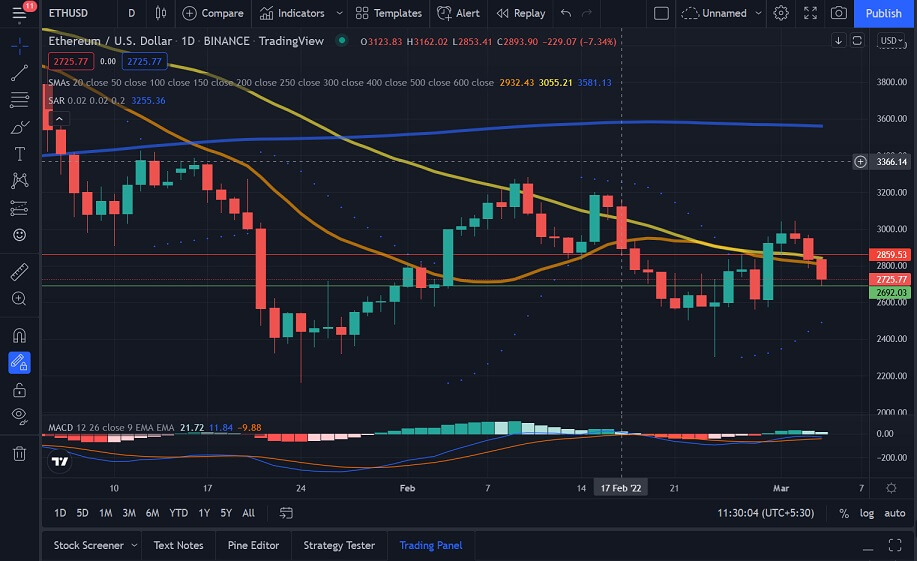 The Ethereum price started the weekend by registering a marginal increase on Saturday before dropping back significantly on Sunday, falling by nearly 6% and ending the weekend at $2617. ETH surged on Monday, rising by nearly 12%, pushing above the 20 and 50-bar SMAs and moving to $2922. Tuesday saw ETH remain in the green, rising by nearly 2% and moving to$2977 before dropping back on Wednesday, falling to $2949. On Thursday, ETH remained in the red, falling by almost 4%, slipping below the 50-day SMA and settling at $2834. The current session sees ETH continue to drop as sellers look to push ETH down to $2700.

Looking at IntoTheBlock’s IOMAP for the Ethereum price, we can see that ETH faces strong resistance at around $2860. At this price level, over 849,000 addresses have sold more than 10 million ETH.

We can see that the MACD and Parabolic SAR are both bearish, but if ETH can recover, we could see them flip to bullish. 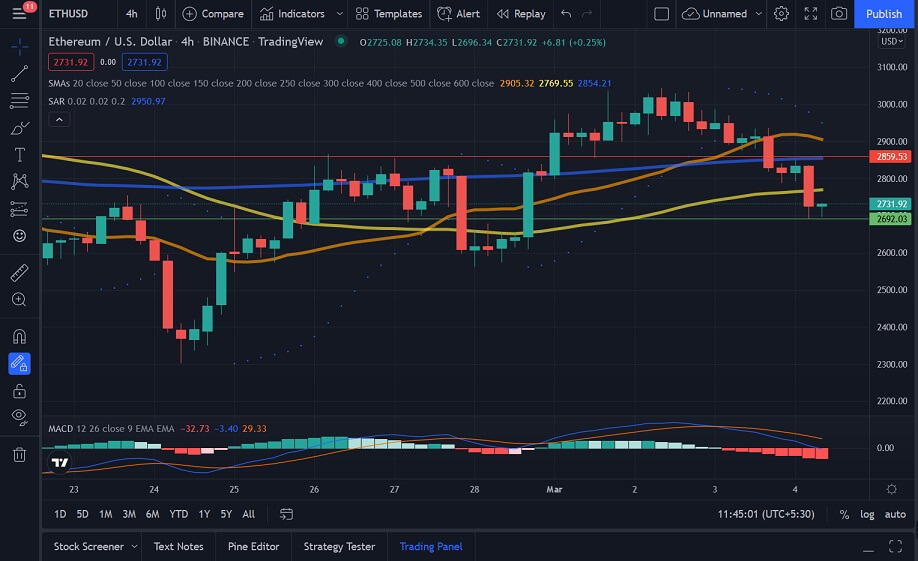 The US Securities and Exchange Commission is probing NFT creators and marketplaces for regulatory violations, according to a Bloomberg report that cited sources familiar with the investigation.

Per the report, the probe is looking into whether NFTs "are being utilized to raise money like traditional securities." The SEC has reportedly sent subpoenas related to the investigation and is particularly interested in information about fractional NFTs, which allow multiple people to hold (and trade) a share of an asset.

Securities are tradable financial instruments, such as company shares, bonds in a government or business, and derivatives based on another asset. The SEC has traditionally not considered Bitcoin to be a security because it's often used as currency.

Ethereum has gotten a pass because the project has ostensibly decentralized to the point where no single group controls its success. But the agency has been more suspicious of other crypto assets and is embroiled in a months-long lawsuit with Ripple Labs tied to the creation and distribution of XRP, the sixth largest crypto asset by market cap, which it views as an unregistered security.

The federal agency has gone hardest after initial coin offerings, or ICOs, a popular way for cryptocurrency startups to bootstrap their projects back in 2017 and 2018. The idea was that projects would sell tokens that would provide some future utility on their network; the largest ICOs, Telegram, and EOS, raised billions in Bitcoin and Ethereum via this method. Both companies faced enforcement action from the SEC, with Telegram ultimately forced to abandon its crypto ambitions altogether.

Looking at the Ethereum price chart, we can see that ETH has been highly bearish during recent sessions. If the current bearish sentiment persists, we could see ETH drop to $2700. However, if the price can recover, ETH could move towards $2800.

What's the Future of Ethereum?

How to Make (or Lose) Money with Ethereum (ETH)?

Is It Too Late To Buy Ethereum?

What Is The Risk Of Staking Ethereum