Bitcoin’s last bull runs to stardom inspired the successes of multiple other altcoins. As the world’s leading cryptocurrency achieves previously unimaginable milestones, upcoming investors are inspired to back smaller coins with the hope they will also break Bitcoin’s records.

The problem is, most of these new icons are either direct copycats or close replicas of Bitcoin’s technology. For this reason, they either fizzle out as soon as they get their names out or experience excruciatingly slow growth.

However, there are also a few notable coins that chose a different technological infrastructure from Bitcoin. One of them is IOTA. Unlike the plethora of other upcoming cryptocurrencies, IOTA does not use blockchain technology, is not mined, and doesn’t have the outlandish transaction fees associated with bigger coins like Bitcoin.

This kind of uniqueness has set IOTA on a path that few new cryptocurrencies dared to take. While it started trading at an understandably low price, it quickly grew against the expectations of most price forecasts.

IOTA has previously hit an all-time high price of $5.25, according to historical data from CoinDesk. Although the coin is struggling to reach this point again, there is a good indication that it might do so by the end of this year.

So, if you are looking to add IOTA and disruptive coin to your portfolio but aren’t sure if it is worth investing in, this guide will come in handy. We will be looking at some of the latest and updated IOTA price predictions and whether the current bull run will hold into the coming years.

Before that, let’s look at what exactly is IOTA and how it is different from the other cryptocurrencies.

What is IOTA (MIOTA)?

Factors Affecting the Price of IOTA

Conclusion: Is IOTA a Good Investment?

What Is IOTA (MIOTA)? 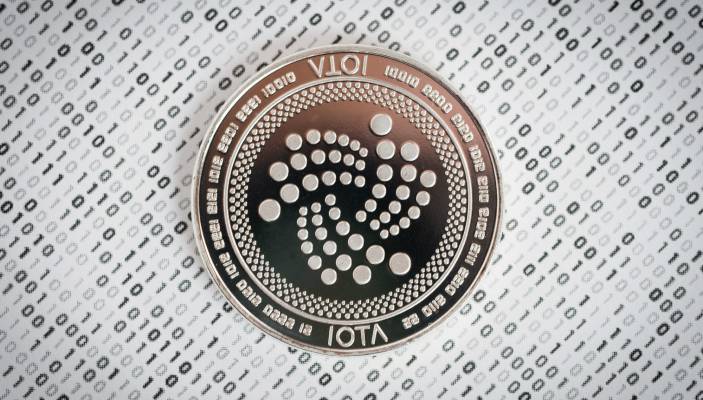 IOTA is a distributed ledger that was developed to facilitate easy transactions and data sharing between devices in the Internet of Things (IoT) network. The IoT is a smart technology that enables the connection of several devices and machines via an internet connection. For instance, a door lock and smart bulb that can be controlled via an app on your smartphone are considered IoT devices.

MIOTA  is the native cryptocurrency that powers the IOTA platform. Much like Ether is to Ethereum or XRP is to Ripple.

IOTA was created in 2015 by four crypto developers. These are:

The four wanted to provide a more seamless way to carry out transactions through the IoT ecosystem without much human interaction. For instance, the IOTA technology could make it possible for you to buy groceries using a smart fridge or pay for your electricity bill using a smart bulb. These transactions are made using the MIOTA cryptocurrency instead of actual fiat money. This will help to eliminate Bitcoin’s latency and possible transaction costs.

IOTA is quite different from the other cryptocurrencies we already know. For once, although it is a distributed ledger, it does not use the traditional blockchain technology that is the backbone of most cryptocurrencies that came after Bitcoin.

Instead, IOTA is powered by a decentralized Directed Acyclic Graph (DAG) known as Tangle. The DAG ecosystem verifies transactions using nodes instead of the blocks used in Blockchain. This technology enables a variety of chains to coexist and interconnect. The result is a secure and impenetrable system when compared to blockchain that is often vulnerable to the 51% attack technique.

The Tangle technology also makes IOTA easier to scale than most blockchain-based cryptocurrencies and platforms. This means that IOTA’s efficiency is not bottlenecked by a growing network. Instead, the more the network widens, the quicker and safer new transactions are validated. In fact, IOTA’s growth and transaction speed is directly proportional to the number of its users.

Tangle also does not require mining or the use of high-end energy-hungry computer systems. This means that there are no miners to reward as Bitcoin does, and as a result, most of the burdening operation costs are eliminated.

Due to its huge potential for profitability and mainstream adoption, the IOTA Foundation has already closed several high-profile partnerships to help widen its network further and also make itself more legitimate in the eyes of prospective investors.

These included partnerships with companies such as:

With all this success, most people are beginning to wonder if IOTA is a good investment this year and beyond. There is no better place to start answering that question than reviewing MIOTA’s price history.

Although IOTA recently saw some kind of parabolic growth, it has not always been dominating headlines and blowing valuations like Bitcoin. Like most new cryptocurrencies, IOTA had a dormancy phase as it struggled to carve out space for itself in the already crowded cryptocurrency market.

So, when it comes to analyzing IOTA’s past price history, we won’t be going way back to its genesis because there wasn’t much action then. Even so, the few years that IOTA began to attract some plausible valuation have been hectic enough to warrant an interesting price history.

Although IOTA was created in 2015, it didn’t go live until 2016. This was a year or so before late 2017 and early 2018, when most cryptocurrencies were ballooning and breaking new price and valuation records. Most cryptocurrencies experienced a parabolic growth during this period that they haven’t been able to replicate for years.

While this growth is not as bewildering as that of Bitcoin, it was still pretty huge considering how slowly competing coins were growing even with the market-wide bull run. As other coins were plummeting as quickly as they had surged, IOTA managed to survive above $4 until early January 2018.

In Jun 2018, it gave in to the shrinking investor interest and went back to below $1. The price stabilized below this point until 2020, when the world’s economy was shaken by the Corona Virus pandemic.

Most parts of the world were put under lockdown, causing investors to lose confidence in the cryptocurrency market. As a result, most cryptocurrencies plummeted, with a few going back under the radar. Subsequently, the price of IOTA fell from $0.275654 to a humbling $0.137891 between March and February 2020.

However, towards the end of 2020, the crypto market began to look up with some coins going back to their pre-coronavirus prices. IOTA took a little longer to recover, but it quickly scaled charts at the beginning of 2021.

This is a more promising prediction compared to what we are seeing with other sites like Digital Coin Price.

According to Digital Coin Price IOTA will mostly stagnate above the $1.4 point without reaching $2 and will be traded at $1.52 by the end of 2022.

Wallet Investor seems to have a similar prediction expecting the average price to be around $2.8 during 2023 and $3.44 by the end of the year, after trading at $5 for a bit.

On the opposite side is the prediction of Trading Beasts. The site forecasts that the price of IOTA will start rising in the second half of 2023 and will reach $1.81 by the end of the year.

The most bullish prediction is from Prime XBT. The site expects the price of IOTA to reach $4 by 2023.

Digital Coin Price has similar predictions for the future price of the coin. The platform predicts the price of IOTA will be rising in the following years and it will be traded above $4.44 in 2029.

As per Prime XBT, for 2024-2025 the site forecasts that "IOTA’s futuristic tech might finally come to fruition and prices could then begin to move a lot more rapidly". According to the site, IOTA will start gradually rising towards the $10 mark and could potentially reach even $20.

Factors Affecting The Price Of IOTA

Given that IOTA is dependent on the highly popular IoT, there are a lot of extrinsic factors that can affect its price movement. These factors play an important role when it comes to determining MIOTA’s future price and whether it’s a good addition to your investment portfolio.

They will also help you understand what to look out for when monitoring the current price movement for short-term trading. Some of these factors, such as supply and demand, affect the whole crypto market. However, there are those that are specific to IOTA itself, such as the adoption of the IoT technology.

Most cryptocurrency prices are directly affected by the interplay of supply and demand. IOTA is no exception. In a nutshell, if the demand for IOTA is more than its supply, the price will quickly rise. In this case, higher demand means that the number of people buying IOTA is more than that buying.

The opposite is also true. That is, if many people suddenly decide to sell their IOTA investment, the supply will be more than the demand, and the price will drop.

Adoption of the Internet of Things

According to data from Statista, more than 30 billion IoT devices around the world are currently connected to each other. This number is projected to rise to about 75 billion by 2025. Now, if this projection were to come true, the demand for IoT would be more than double what it is now in the next four years.

As a pioneer in IoT cryptocurrency transactions, IOTA will no doubt be swept by this success and become wildly successful in the coming years. While not all IoT devices will use the IOTA technology, a good number will do as the world generally starts to appreciate cryptocurrencies.

With the possibility of more devices joining the IoT ecosystem, IOTA’s reach will also widen. This will make it a big enabler of the machine-to-machine economy. As a result, more investors will take an interest in it, and the price will quickly surge.

Being not as popular as Bitcoin or Ethereum, IOTA is not currently listed on all major cryptocurrency exchanges. As more of these exchanges decide to pick it up, it will be able to reach more investors and subsequently skyrocket its valuation.

This will be as a result of more people either holding it or trading for the short term.

The success of cryptocurrencies like Bitcoin has been partly dependent on social and publish media. The same goes for IOTA. As it receives more attention and makes headlines, it will reach more investors. This will help widen its user base and subsequently increase its price.

Conclusion: Is IOTA A Good Investment?

The future of the cryptocurrency market paints a generally positive outlook. It is expected that as Bitcoin continues to blossom, so will the smaller altcoins. And while IOTA is not directly dependant on Bitcoin’s technology or even ideology, there is great potential that it will also bask in the upcoming crypto summer.

So, if you are wondering if IOTA is a good investment, we think there are a lot of good reasons you might want to consider it. Unlike the other altcoins, which are a bit ambiguous on the problems they are trying to solve, IOTA is pretty specific. This will make it easier for both new users and potential investors to understand it and probably invest.

So is IOTA a good investment? Right now could be the right time to invest before the prices shoot up.

Using some of the IOTA price predictions highlighted above by some of the crypto industry experts, this is how they expect the coin to perform in the next five years: