Is Tezos a Good Investment & Should I Invest in Tezos?

Should I Invest in Tezos? Is Tezos a Good Investment?

Investing In Tezos : Getting Started

Will Tezos overtake other cryptos, such as Ethereum, EOS, or Cardano?

If you are interested in Tezos and its investment potential, this article is just for you. We at Trading Education are here to provide answers to all your financial questions .

So, what is Tezos and is Tezos (XTZ) a good investment? Why is Tezos one of the fastest-growing cryptocurrencies and why are so many investors curious about Tezos?

Keep on reading to find out more about XTZ investing and decide for yourself if investing in Tezos is worth it!

If you are new to the world of Tezos investing, you might be wondering if Tezos is a good investment or should I invest in Tezos?. Well, let’s break all Tezos-related concerns before you consider investing in Tezos XTZ.

Getting Started With Tezos Investing

If you want to buy Tezos quickly and easily, with 0% commission, check out eToro Exchange!

What is Tezos in the first place? Tezos is an open-source blockchain-based platform that can be used for the execution of peer-to-peer transactions and smart contracts.

Like other cryptocurrencies, Tezos aims to decentralise the financial sector and provide equal access to people from all walks of life.

Here we should note that although Tezos was proposed in 2014 by Arthur and Kathleen Breitman as a unique decentralised ecosystem, the platform was released a few years later; Tezos was launched in 2018.

Peculiarly enough, the founder of Tezos once said that Tezos is the ancient Greek word for smart contracts. And while the origin of the name is questionable, the initial success of Tezos wasn’t a joke. For less than a couple of years, Tezos has established itself as one of the leading blockchain projects in the cryptocurrency investing sector.

Now Tezos is one of the main competitors of Bitcoin and Ethereum and, as mentioned above, Tezos - just like other cryptocurrencies - aims to reduce the need for central banks and authorities.

That’s not all! Tezos goes a step further and offers an advanced infrastructure that can change and evolve without risking the occurrence of a hard fork. Let’s not forget that hard forks refer to any drastic changes to a network’s protocol. The best aspect of Tezos is that users can vote on proposals for upgrades and developments in the actual blockchain technology.

The unique twist comes from the fact that users and investors can participate in the network’s governance through a process known as baking. To ensure that this process is honest, each participant has to make a security deposit and stake XTZ, a roll of 8,000 XTZ.

Bakers can vote on proposed changes in a multi-stage process that takes up to 23 days, with changes being fully implemented only after they’ve been backed by a super-majority.

As developers put it, “Tezos takes a fundamentally different approach by creating governance rules for stakeholders to approve of protocol upgrades that are then automatically deployed on the network… When a developer proposes a protocol upgrade, they can attach an invoice to be paid out to their address upon approval and inclusion of their upgrade.”

No surprise that thanks to its effective and democratic governance process, Tezos defines itself as a “secure, upgradable and built to last” platform that will “remain state-of-the-art long into the future” - a platform worth investing in.

The native cryptocurrency of Tezos is XTZ or tez. In other words, tez is defined as the utility token used for the Tezos ecosystem. At the time of writing, there are 750,982,516 XTZ in circulation.

Note that developers haven’t announced the total amount of XTZ planned to be released. While some argue that lack of scarcity is detrimental in the investment sectors, developers believe that this way Tezos will never reach its capacity limits.

Despite its success, however, the release of Tezos was delayed due to legal disputes between investors and founders regarding unregistered securities.

Still, the price of XTZ had a dramatic increase between October 2019 and February 2020: 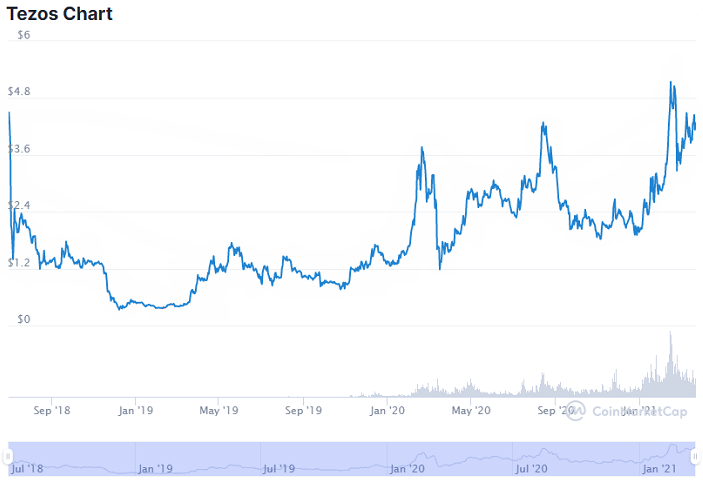 The good news is that one can purchase XTZ from a reputable platform like eToro.

Is Tezos a Good Investment?

Yes of course, Tezos XTZ is a good investment. Especially for investors who feel passionate about its democratic and decentralised approach. Though Tezos is a relatively new cryptocurrency

Because of its unique structure and flexible governance, Tezos is now a leading competitor of Ethereum, NEO, and Cardano in the deployment of decentralised apps (dApps) and smart contracts.

Moreover, Tezos utilises a liquid proof-of-stake consensus mechanism (an upgrade of the delegated proof-of-stake system) and a multi-language approach (imperative and functional) to ensure both flexibility and safety.

This strategy also improves transaction speed, with XTZ being capable of executing about 1,000 transactions per second.

With a stake rate of over 80% spread across 13,000 delegators and 450 validators, Tezos is one of the most decentralised platforms. As such, Tezos will likely continue to increase in popularity, especially if decentralised finance (DeFi) projects and proof-of-stake cryptocurrencies manage to cause the next crypto bull market.

It’s not only its on-chain self-governing properties and continuing development that attract investors; the continuing positive financial development of XTZ is another factor that makes Tezos stand out.

Would you consider investing in Tezos XTZ?

How Much Could Tezos Be Worth?

Prices depend on various factors, such as supply and demand, tech innovations, crypto news, and market sentiment.

While its future growth depends on tech innovations and support, we should also look at past data to make price predictions. With peak levels of almost 300% in 2019, Tezos has become an attractive investment and a crypto news miracle.

It’s also a fact that Tezos has managed to survive the bear market triggered by the ongoing pandemic and is slowly recovering from the global health crisis.

Looking back, Tezos started also as a high-profile business, which is a huge advantage in the financial sector. As reported by CoinDesk, in 2020 French Societe Generale planned to employ Tezos for experimenting with a central bank digital currency. Big exchanges and influential investors, such as the Winklevoss brothers, also supported Tezos.

In fact, Tezos reached new highs in 2020. Statistics show that XTZ hit $3.24 on February 12, 2020 - a 25% increase in just a matter of 24 hours, making Tezos one of the fastest-rising blockchain networks and most profitable top 20 cryptos, as per CoinMarketCap.

The outlook for Tezos is also positive. According to some optimistic predictions provided by WalletInvestor, XTZ can be a profitable investment in the long-term. Based on their forecast, if one invests $100 today, they may gain revenue of +352.73% in five years.

According to predictions provided by DigitalCoinPrice, Tezos may reach $8.83 by 2026 and even hit $10 in the next six years.

Coinpedia goes a step further and suggests that Tezos may reach a price of $20 in the next five years, which potentially makes Tezos a profitable investment in the long-term.

Is Investing in Tezos Risky?

Investing in Tezos and any other cryptocurrency can be risky.

Despite the potential of Tezos and its innovative on-chain governance, cryptocurrency prices are highly volatile and speculative, so investors should exercise due diligence.

There’s no such thing as a 100% safe investment, so never risk more than you can afford to lose. The best way to invest in Tezos is to allocate an amount you are comfortable investing.

Experts suggest investing only around 5% in cryptos to diversify your portfolio, following an important rule: never risk more than 1% of your account on a single trade.

Should I Invest in Tezos? 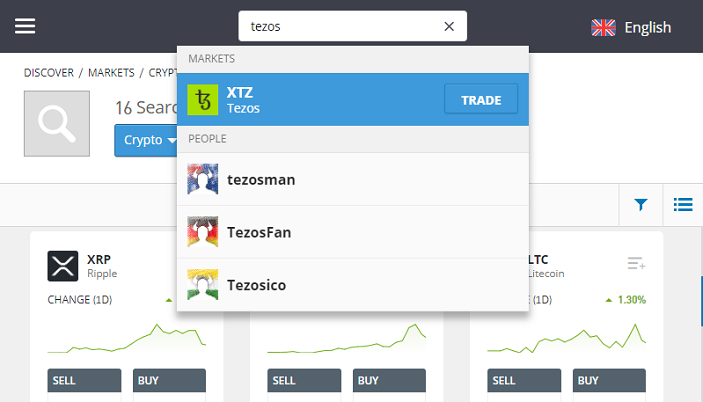 Tezos is a coin worth considering. Though cryptocurrency investing is not a risk-free, investing in Tezos is worth watching. Simply because Tezos has a large and growing ecosystem, ranking #18 in the cryptocurrency sector!

After you’ve analysed the risk-reward profile of Tezos, you should decide if you are interested in day trading or long-term investing, create an effective strategy, and open an account with a reputable exchange such as eToro.

Do not forget that with Tezos, you can also earn passive income by staking.

Keep in mind that you don’t have to put all of your eggs in one basket, so diversify your portfolio and explore other strong assets, such as Bitcoin, Ethereum, Ripple, and EOS.

Here we should note that cryptocurrencies (particularly, those that survived the bear market of 2018) are usually undervalued compared to other investments, but can be highly profitable investments.

Who should include Tezos XTZ in their portfolios?

As a matter of fact, Tezos can be a good investment for:

In the end, there’s no one-size-fits-all approach in crypto investing, so you should decide for yourself if Tezos investing is for you or not. It depends on your goals, knowledge, and expertise; always exercise due diligence.

If you enjoyed reading our article Is Tezos a Good Investment & Should I Invest in Tezos please share it with other crypto investors and blockchain enthusiasts.

What is the purpose of Tezos?

Tezos is a blockchain-based platform that aims to facilitate cross-border payments and create smart contracts and applications by eliminating the need for third parties. It is also a platform that facilitates formal verification by improving security; a platform that provides a democratic infrastructure where users can vote on changes without risking the occurrence of a hard fork.

The fact that Tezos allows users to participate in decision-making is the most unique aspect of Tezos. As stated above, Tezos is a self-amending and democratic blockchain platform that can update itself without the occurrence of a hard fork, providing flexibility and security all at the same time.

Is Tezos better than Ethereum?

In terms of market cap, Ethereum is performing better than Tezos, with many crypto investors claiming that Ethereum is the king of smart contracts and the real competitor of Bitcoin. At the same time, we can say that Tezos is better than Ethereum in terms of technology. Tezos is a cryptocurrency that uses a delegated proof-of-stake consensus (DPoS) or the so-called liquid proof-of-stake, which makes it more robust than the current state of creating new Ethereum. On top of that, researchers claim that Tezos is more decentralised and transparent than other DPoS blockchains.

How much do you need for Tezos baking?

In order to start baking, you need a roll of Tezos. Originally, each roll was 10,000 XTZ but the amount needed was lowered to 8,00 XTZ to make voting more accessible and decentralised. If you don’t have enough capital, you can delegate your share to a baker who’ll be randomly selected from other bakers.

Yes, baking Tezos can be profitable. According to data provided by Messari, the yield for staking Tezos is higher than similar coins. In addition, Tezos offers the highest returns compared to other PoS cryptos, at more than 7.3% per year. No surprise that Tezos is one of the most-staked assets, with users baking $495 million XTZ or 75% of its current supply.