Ripple Price Analysis: XRP Continues To Drop, Could Slip To $0.70

The Ripple price had started the weekend on a slightly positive note, rising by 0.57% and settling at $0.77. However, the price fell back on Sunday, registering a marginal drop and ending the weekend on a bearish note. The Ripple price continued to drop on Monday as the week got off to a bearish start, with XRP dropping over 2%. Tuesday saw XRP continue to drop, as the price fell to $0.75 and then dropped below this level during the current session.

The Ripple price started the previous week in the red, dropping by 1.73% and settling at $0.73, before registering a strong recovery on Tuesday and rising to $0.77, registering an increase of over 4%. Wednesday saw the price continue to push higher, rising by almost 4% and settling at $0.79. XRP was unable to push to $0.80 and fell back on Thursday, dropping to $0.76, a drop of almost 4%. However, the price recovered on Friday and pushed back to $0.77, registering an increase of 0.92%. 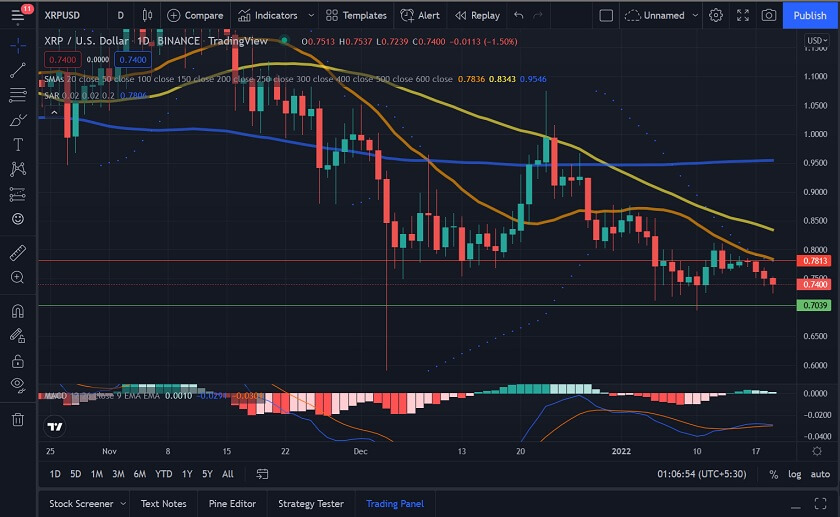 The Ripple price continued to push over the weekend, registering an increase of 0.57% on Saturday, before dropping back on Sunday and ending the weekend on a bearish note. On Monday, the price continued to drop, falling over 2% to $0.76, then dropping by 1.46% and settling at $0.75. The current session sees XRP down nearly 2%, as sellers look to drive the price down to $0.70.

The Parabolic SAR is currently bearish, indicating that we could see the price drop further. 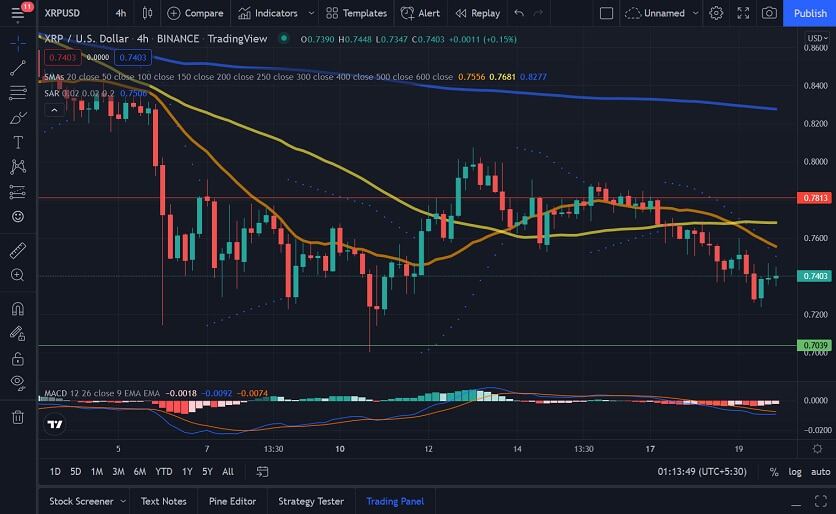 The 4-hour Ripple price chart shows us that XRP had dropped to $0.75 on the 14th, slipping below the 20 and 50-bar SMAs. The price recovered from this level, pushing back above the 50-bar SMA and moving to $0.77. With the 20-bar SMA acting as resistance, the price could not move past this level until the 15th, when the price rose to $0.78. With the 20-bar SMA now acting as support, XRP could stay at this level for the next few sessions before dropping below the 20 and 50-bar SMAs on the 17th, dropping to $0.75. The price continued to fall from this level, dropping to $0.74 from where it registered a marginal increase and then dropped to $0.72. After dropping to this level, the price made a marginal recovery, rising to its current level of $0.74.

Binance recently announced the launch of Wrapped XRP (wXRP) in one of its boldest steps towards improving cross-chain functionality and interoperability yet. The announcement reads:

“Binance has completed the wXRP integration and has opened deposits for wXRP on Ethereum (ERC20). Please find your assigned XRP deposit addresses on Ethereum Network (ERC20) within the Deposit Crypto page.”

“It’s called a wrapped token because the original asset is put in a wrapper, a kind of digital vault that allows the wrapped version to be created on another blockchain.”

In essence, this means that wrapped XRP can be used on other blockchains such as Ethereum ERC20, Binance Chain, smart contracts, and DeFi, other than its native ledger enabling users to transfer, stake, and exchange wXRP with DApps and wallets on the host network.

The wrapped XRP does not lose its original value, and just like USDC is tied to the dollar to the ratio of 1:1, so is XRP to wXRP, meaning that XRP’s price movements are mirrored to those of wXRP. Wrapping XRP has been a year-long journey, with the initial announcement made in late October 2021. The process entailed a collaboration between cross-chain developer firm wrapped.com and Hex Trust.

With an increased demand for cross-chain functionality and the growth of DeFi, users are increasingly looking for ways to circumvent limitations facing the usage of one non-native asset on a blockchain, leading to the emergence of wrapped tokens.

Looking at the Ripple price chart, we can see that XRP has registered a considerable drop during the ongoing session as its bearish week continues. If the current sentiment persists, we could see XRP drop to $0.70.