The Ripple price fell back during today’s session, as buyers forced the price down, with the price currently at $1.25. XRP had registered a marginal drop on Saturday, with the price quite bearish towards the end of the previous week. However, XRP made a strong recovery on Sunday, rising to $1.22 and then rose to $1.28 after registering an increase of over 5%. However, the current session sees XRP in the red, as the price failed to push past $1.30.

The Ripple price was quite positive during the previous weekend, having registered a marginal increase on Saturday before rising by 2.69% on Sunday and pushing above the 20-day SMA to settle at $1.11. However, the week started on a negative note as XRP dropped by 1.93%, slipping below the 20-day SMA. The price recovered from this level, rising to $1.13 on Tuesday and then to $1.21 on Wednesday, after registering an increase of over 6.57%. The price then took a bearish turn, as it dropped on Thursday, falling to $1.20. 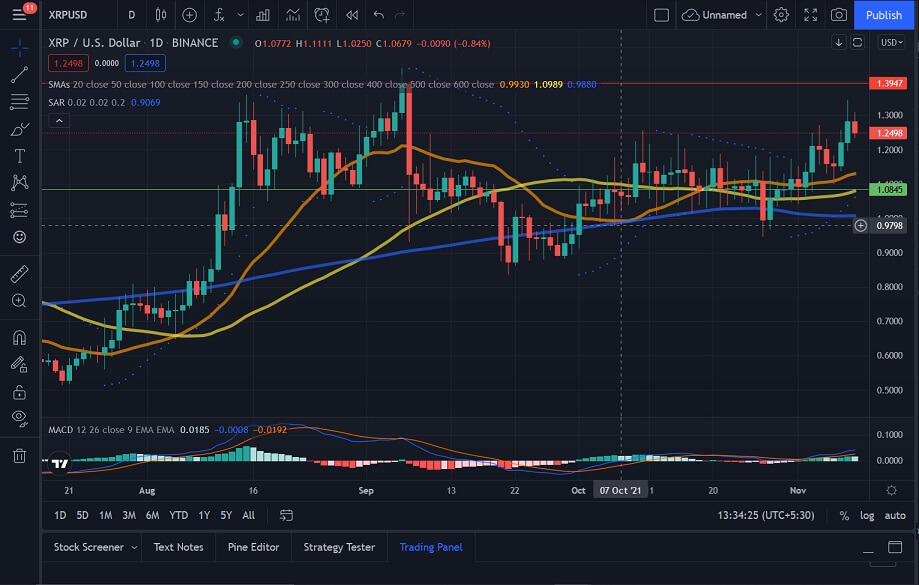 The Ripple price continued to drop on Friday, falling by 3.50%, as the price settled at $1.15. The price continued to be bearish at the start of the weekend, registering a marginal drop of $0.62 on Saturday. However, XRP made a strong recovery from this level, as the price surged by almost 6% on Sunday, rising to $1.22. XRP saw a further increase on Monday, as it started the week on a positive note, rising by over 5%. The current session sees sellers back in control, with the price currently down by over 2%. We can see that the Parabolic SAR and MACD are still bullish. However, if the price continues to drop, we could see them flip to bearish. 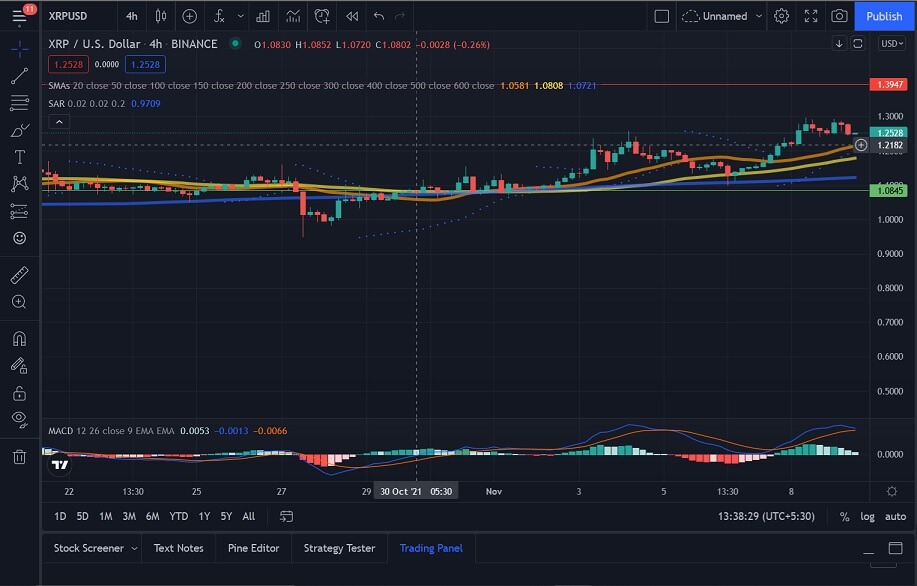 Magistrate Judge Sarah Netburn recently ordered Ripple to turn over audio and videotaped recordings of its internal meetings, siding with the US Securities and Exchange Commission.

In her recent order, Netburn said that the company has to undertake such efforts and not postpone the discovery deadline:

"In light of the close of discovery, Ripple is order[ed] to undertake such efforts without delay."

The parties will have to meet and confer to decide what exact recordings are the most responsive to the plaintiff’s demands. Per previous reports, the SEC filed a motion to compel the production of the recordings in late August.

After initially opposing the request, the parties reached a belated agreement in early September, with Ripple agreeing to conduct “a reasonable search” for relevant documents.

However, in October, the defendants accused the regulator of retreating on its prior position, arguing that its recordings request was “plainly disproportionate.”

In related news, Ripple logged a 211% quarter-over-quarter increase in its XRP sales, according to the company’s Q3 report. It sold $491.74 million worth of XRP during the previous quarter compared to $157.92 million in the second quarter of the year.

The growth is attributed to the success of Ripple’s On-Demand Liquidity (ODL) service, which uses XRP as a bridge between fiat currencies.
Ripple Price Is Expected To Reach These Levels

The Ripple price chart shows that sellers have taken control of the current session, with the price currently down by over 2%. If the current sentiment persists, then we could see XRP drop to $1.20.