Ripple Price Prediction: XRP Drops Below $0.80 On Friday, Back Up To $0.82 After Recovery

Ripple Price Chart Indicates XRP Could Drop Back To $0.80

The Ripple price started the previous weekend on a bearish note as the market experienced a significant selloff. XRP dropped by over 5% on Friday, slipping below the 200-day SMA and settling at $0.92. The price continued to drop over the weekend, as it fell by over 8% on Saturday and settled at $0.84. Sunday saw more of the same, with XRP shedding almost 5% and ending the weekend at $0.80. The price did manage to recover on Monday, rising by 2.68%, but fell back on Tuesday, falling to $0.81. 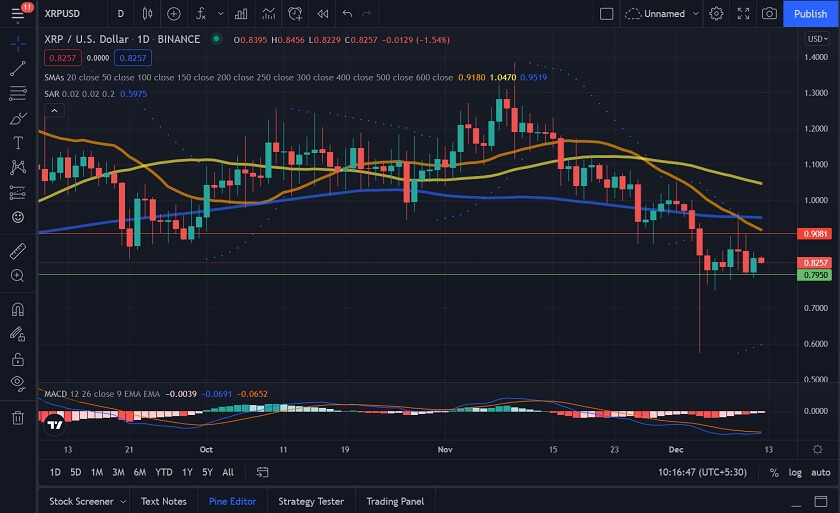 After dropping to $0.81 on Tuesday, the Ripple price made a strong recovery on Wednesday, rising by almost 6% and settling at $0.86. On Thursday, the price fell back in the red, registering a marginal drop, before dropping by almost 7% on Friday and settling at $0.79. A recovery on Saturday saw XRP push up by almost 5% and rise to $0.83, but then it fell back during the ongoing session.

We can see that the Parabolic SAR is currently bullish, although if sellers continue to push the price down, we could see it flip to bearish. 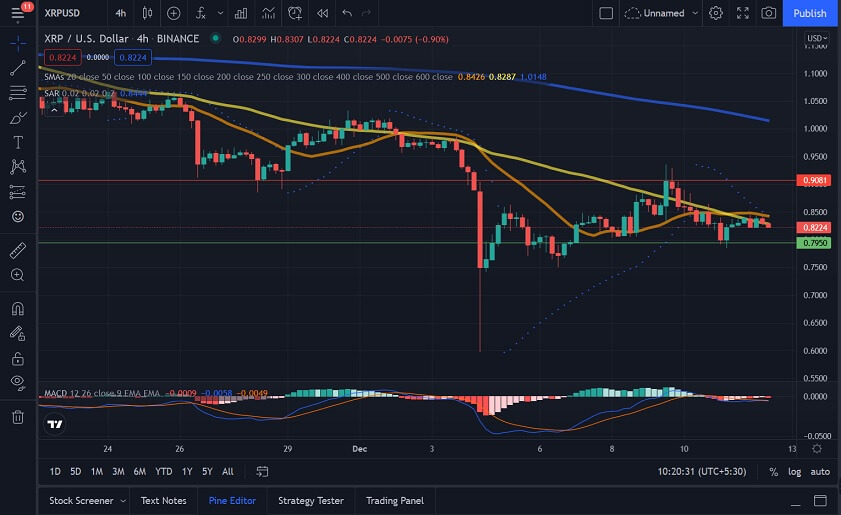 Fintech firm Ripple recently explained, “how existing financial regulatory frameworks can be used to advance innovation and enhance consumer and market protections.” In a three-page document published by Ripple, the firm described its “vision of a pragmatic regulatory framework for cryptocurrencies, blockchain-enabled payments and digital assets.”

Ripple mentioned that it hopes for “a regulatory framework that encourages the unleashed potential of cryptocurrency and blockchain technologies, while also establishing important consumer and market protections.”

Ripple believes that “any legislation or policy framework intended to regulate cryptocurrencies should promote an active dialogue between regulators and market participants” since such “public-private collaboration” should “lead to more tailored and effective policy outcomes for the industry and consumers alike.”

Furthermore, according to Ripple, “U.S. financial markets are considered first in class, and that is due in part to the existing regulatory framework under which they operate.” They say that this framework (providing it was “adapted” to “account for some of the unique attributes inherent to cryptocurrencies) could “provide the clarity innovators seek – and the market protections consumers deserve.”

The firm gave examples of two existing legislative proposals in this area: “the Securities Clarity Act (SCA)” and “the Digital Commodity Exchange Act (DCEA, H.R. 8373 in the 116th Congress).” Ripple concluded that “each of the above proposals – whether implemented separately or together –can succeed in keeping industry within the US, while also maintaining the strong consumer and investor protections that have made American capital markets the best in the world.”

Looking at the Ripple price chart, we see that XRP has fallen back during the ongoing session. If the current sentiment persists, the price could drop to $0.80 or below, although the price does have support at $0.79.