The Ripple price is marginally up during the ongoing session, as XRP looks to move past the 50-day SMA. XRP had registered a marginal increase on Thursday after a highly volatile session. The price surged by nearly 11% on Friday, pushing above the 50-day SMA and settling at $0.77. The price fell back in the red over the weekend, dropping by 2.44% on Saturday and then by nearly 4% on Sunday to end the weekend at $0.72 before registering a marginal increase during the ongoing session. 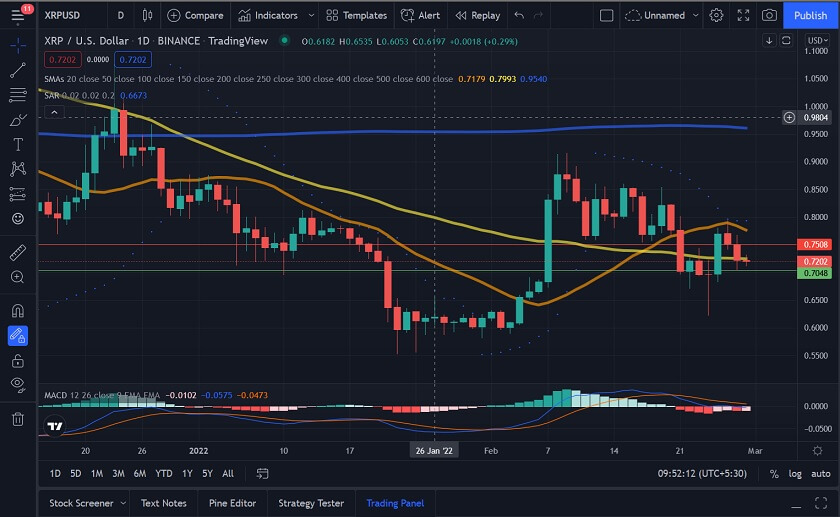 The Ripple price continued to remain bearish on Thursday, registering a marginal drop on Thursday after a highly volatile session. Friday saw XRP surge, as the price pushed up by nearly 11%, moving above the 50-day SMA and settling at $0.77. However, the price fell back over the weekend, dropping by 2.44% on Saturday and then by nearly 4% on Sunday, slipping below the 50-day SMA and settling at $0.77.

We can see that the MACD is currently bearish, indicating that we could see the price drop. However, if buyers can push the price up, we could see it flip to bullish. 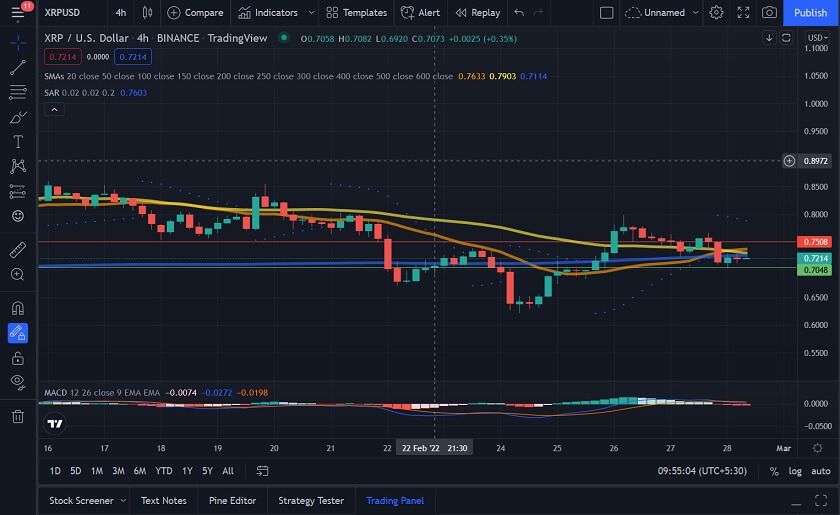 Looking at the 4-hour Ripple price chart, we can see that XRP had pushed up to $0.73 on the 23rd, pushing above the 200-bar SMA. At this level, the 20-bar SMA was acting as resistance, and the price fell back, dropping back below the 200-bar SMA and settling at $0.63. XRP made a strong recovery after dropping to this point, rising above the 20-bar SMA on the 25th when it rose to $0.72. The price continued to push higher from this level, pushing above the 200 and 50-bar SMAs and surging to $0.77 on the 26th. However, after reaching this level, XRP turned bearish, dropping to $0.73 and going below the 50-bar SMA. After a marginal recovery, XRP fell back again, slipping below all three SMAs and dropping to its current level of $0.72.

We can see that the Parabolic SAR and MACD are currently bearish, indicating that we could see the price drop. However, if XRP is able to recover and push towards $0.75, we could see them flip to bullish.

What Might Happen If You Invest $100 In Ripple (XRP) Today?

5 Reasons Why Ripple Could Double Your Money In 2022