Ripple's XRP had an outstanding year in 2021. In addition, many of the major coins like Bitcoin (BTC) and Ethereum (ETH) also reached new highs.

Several factors helped propel the market in 2021. Key among them were FOMO around the Metaverse and NFTs. So high was the excitement around these aspects of the market that the total market capitalization had risen 30.39% by November.

While cryptocurrencies had a minor correction in December, they still closed the year much higher than where they started. Currently, the total cryptocurrency market capitalization stands at $2.23 trillion.

Ripple's XRP had a particularly interesting 2021. In terms of gains, it had a good year and closed the year higher by 319%. However, it still lost its number three position. That's mainly attributable to Ripple's case with the SEC, where the SEC accuses the SEC of selling an unregistered security.

Since the Ripple v SEC case started, the list of top 10 cryptocurrencies has changed significantly. Some of the big gainers that outperformed Ripple's XRP include Binance Coin (BNB), Cardano (ADA), and Solana (SOL). In 2021, Binance Coin recorded gains of 1356%, Cardano 691%, while Solana closed the year higher by 8059%, making it one of the best performers in the year.

XRP's rally did not last, though, and a few months later, XRP was trading at a low of $0.50. This massive correction resulted from two factors: the China-Elon Musk FUD on Bitcoin and the SEC case against Ripple. While the Chinese crackdown on Bitcoin mining and Elon Musk's criticism of Bitcoin hit the whole market, the SEC case particularly hit XRP.

The agency alleges that Ripple raised over $1.3 billion by misrepresenting XRP as a security. While the case crashed Ripple, it renewed investor optimism in other cryptocurrencies that investors believe are fully decentralized. One cryptocurrency that saw a surge in investor optimism was Ethereum (ETH). By November 2021, Ethereum had made new highs above $4800.

There is reason to be optimistic about XRP in 2022. Its performance will depend heavily on the outcome of the SEC case, and experts are bullish it could go Ripple's way.

One of the aspects of the case that investors are keeping an eye on is a claim of bias filed by a non-profit called Empower Oversight. Empower Oversight argues that SEC officials have a conflict of interest, especially regarding compliance with the Freedom of Information Act (FOIA). If Empower Oversight wins the case, the SEC case against Ripple would weaken significantly.

Ripple's lawyer is also pretty confident about the chances of winning the case. The lawyer said that there was a very high likelihood that the case will come to a close in April 2022 and that Ripple could win.

His remarks have seen Ripple XRP's volumes rise across exchanges. This indicates that investors are looking forward to a potential price rally once the case comes to a close.

If the case goes in Ripple's favour, XRP could easily make new all-time highs of over $5. This potential is evident in XRP's price action in April 2021, when Ripple scored a win against the SEC. However, if the SEC wins the case, XRP could be hit pretty hard. 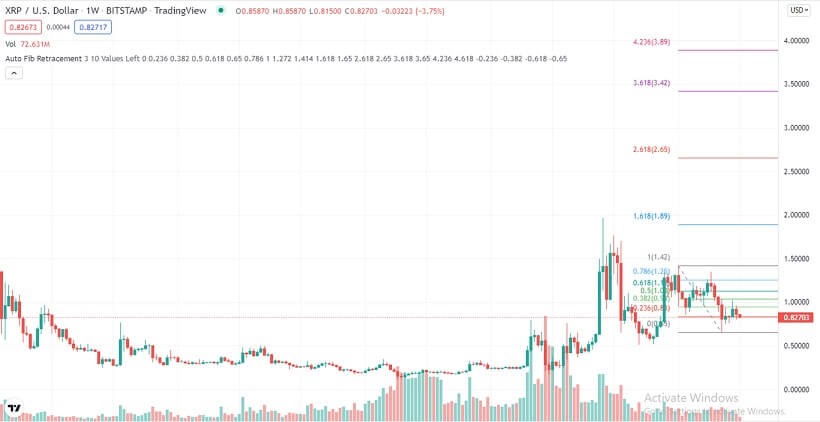