Shiba Inu Price Prediction: SHIB Back In The Red After Weekend Recovery, Drops To $0.000035

The Shiba Inu price was back in the red, as it started Monday on a bearish note, with SHIB currently down by almost 3%. SHIB had entered the weekend on a bearish note, as the price dropped by 3.46% on Friday. However, the weekend saw SHIB post a marginal recovery on Saturday, rising by 2.90%. Sunday saw a bigger increase, as the price rose by over 6%, settling at $0.000036.

The Shiba Inu price started the previous weekend on a fairly bearish note, as the price dropped by 4.29% on Friday. The drop continued on Saturday, with SHIB dropping by almost 10% and $0.000036. Sunday saw a marginal drop before SHIB recovered on Monday, rising by 1.52%. However, the price fell back on Tuesday, falling by 1.41%, but then pushed back up on Wednesday, rising by 2.01% and settling at $0.000036 again. 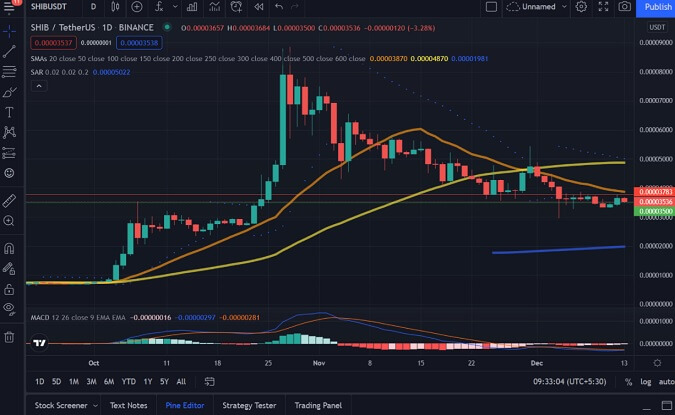 Looking at IntoTheBlock’s IOMAP for the Shiba Inu price, we see that SHIB has strong support at around $0.000035. At this price level, over 10,000 addresses have bought more than 56,900 billion SHIB.

We can see that the Parabolic SAR and MACD are both bullish, indicating that we could see the price rise from this level. 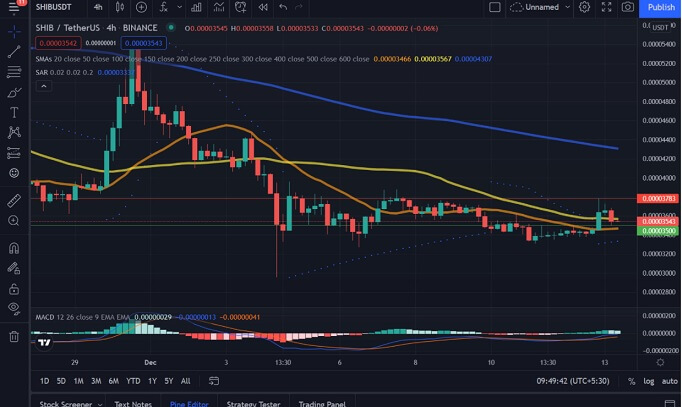 "Avalanche Bridge (AB) is adding new tokens that can be transferred between Avalanche and Ethereum. First up, $SHIB incoming!"

Users can also transfer wrapped versions of Bitcoin and Ethereum with the help of the bridge. Per earlier reports, Avalanche's native token, AVAX, surpassed Shiba Inu by market cap in late November amid a record-setting rally. The two cryptocurrencies have remained neck-and-neck since.

The architect behind the XRP Ledger mocked the token’s gargantuan supply, joking that losing a zillion SHIB tokens would amount to a loss of a minuscule $1.37.

However, SHIB appears to be growing rapidly. Flexa, a cryptocurrency payments company backed by the Winklevoss twins, recently added support for Shiba Inu, according to a recent announcement.

According to WhaleStats, the crypto market has witnessed the birth of a new SHIB whale. The anonymous buyer, who has been on a recent accumulation spree, currently holds nearly 3.2 trillion SHIB tokens. In three large transactions, the SHIB whale bought $120,342,829 million worth of Shiba Inu to join the growing list of large holders for the dog-themed coin.

Looking at the Shiba Inu price chart, we see that SHIB has dropped during the ongoing session. However, the price has strong support at $0.000035, so we could see the price recover from this level.