Solana Price Prediction: SOL Looking To Push Past $210 After Recovery During Current Session

The Solana price is moving towards $210 during the current session, as buyers look to push the price towards $220. SOL has been quite bearish since Monday, although it ended Sunday at $230.57. SOL registered a sharp drop on Monday, falling by over 6% before recovering on Tuesday and settling at $221.89 after an increase of almost 3%. The price fell back on Wednesday, dropping to $205.88 before recovering during the current session.

The Solana price started the previous week in the red, as it registered a marginal drop on Monday. SOL remained bearish on Tuesday, as the price dropped by almost 8%, slipping below the 20-day SMA and settling at $219.28. Wednesday saw another marginal drop as the price remained in the red before a sharp drop on Thursday took the price down to $195.20, where the 50-day SMA acted as support. As a result, SOL pushed up on Friday, rising by over 10% and settling at $215.46. 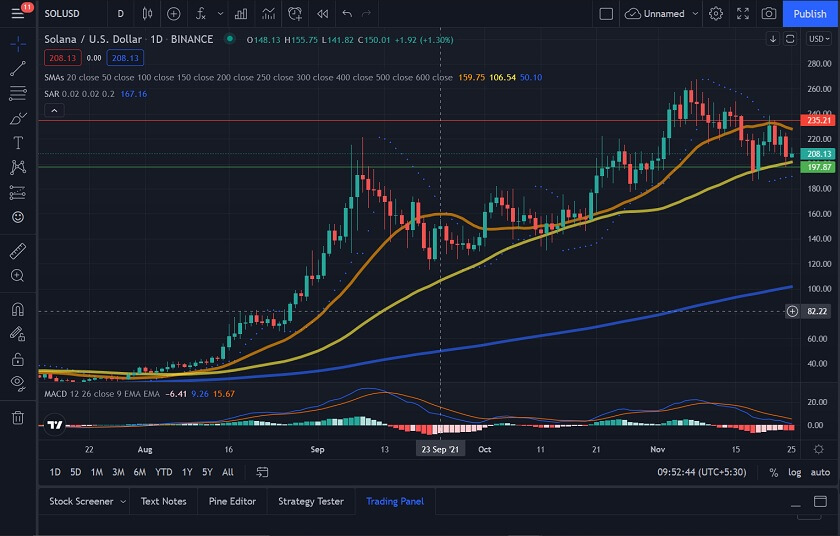 The Solana price continued to remain bullish over the weekend, as the price pushed up by 1.11% on Saturday. Sunday saw SOL push up higher, rising by almost 6% and settling at $230.57. However, Monday saw the price fall back, thanks to the 20-day SMA coming into play as resistance. SOL dropped to $215.83 after dropping by over 6% on Monday but recovered on Tuesday, rising by 2.81%. However, SOL fell back on Wednesday, falling by over 7% and dropping to $205.88. Currently, the price is at $207, with buyers and sellers struggling to control the session.

We can see that the Parabolic SAR is currently bullish, indicating the price could rise. However, if sellers take control, we could see it flip to bearish. 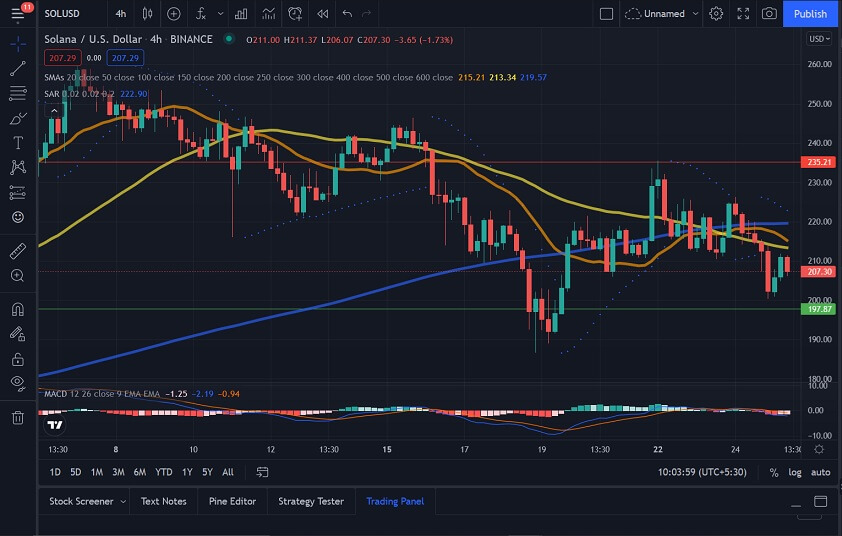 Solana And Cardano Leading The Next Wave Of NFT Charge

According to Jonathan Choi, chief investment officer at Metaplex, while NFTs are gaining traction among mainstream audiences, the technology behind NFTs is much more meaningful. Per a Cointelegraph report, he said:

“NFTs can serve a much broader range of use cases, including representing ownership of physical assets such as real estate, loans, luxury items and other digital assets such as audio, files, degrees or certificates.”

Like most platforms in the decentralized finance space, most NFT-based projects have been built on the Ethereum blockchain. Ethereum’s role in the NFT industry’s growth has been much greater than a mere hosting platform. It was arguably the now-iconic ERC-721 token standard that kick-started the NFT revolution in the first place.

However, with an indefinite roadmap for the Ethereum 2.0 upgrade and its scalability updates, not all projects are convinced it is the best place to set up shop. Networks like Cardano and Solana are making inroads into the realm of NFTs, with Solana even launching a $5 million fund this year to onboard creators and their fans into its ecosystem. Solanart, the most popular NFT platform on the Solana blockchain, is making waves with users in the space, producing collections like the Degenerate Ape Academy, SolPunks, Aurory, and more, with hundreds of millions of dollars trading hands.

“There is so much potential with NFTs, and right now, we’re seeing the exploration of what’s possible. For example, in decentralized finance, NFTs could be used to implement security mechanisms to guarantee the uniqueness of transactions, the correctness of each submitted order and to prevent front-running attacks.”

Though Cardano isn’t striding into NFTs as boldly as Solana, it is making progress. Following the network’s successful Alonzo hard fork that enabled smart contracts, CardanoKidz was launched this year as the first NFT project on Cardano. Last month, SpaceBudZ conducted the first NFT sale for over $1 million on the network.

Layer-one blockchains like Solana and Cardano offer an alternative to the high transaction costs plaguing the Ethereum network while lowering entry barriers for a broader audience. These platforms are also incredibly well-positioned among developers building on Web3 since factors like cost, speed, and community growth are vital during development stages, especially for newer projects.

Looking at the Solana price chart, we can see that SOL had registered a sharp drop on Wednesday. The current session sees buyers and sellers struggling for control. If the price drops, we could see SOL drop to around $200. However, if the price increases, we could see SOL move towards $220.