Solana Technical Analysis: SOL Down By Almost 8%, Could Drop Below $200

The Solana price is currently down by 8% as buyers look to push the price below $200. SOL has been bearish since Sunday when the price dropped to $229.99. On Monday, the price remained bearish, registering a marginal drop, before falling by over 8% on Tuesday. SOL dropped to $219.28 as it slipped below the 20-day SMA before registering another marginal drop on Wednesday.

The Solana price had started the previous week on a bearish note, as the price dropped by 0.54% on Monday. Tuesday saw SOL remain in the red as it fell by 3.73% and settled at $239.15 before $233.35 on Wednesday. SOL registered a marginal increase on Thursday but fell back on Friday, falling by over 2% and settling at $228.61. However, despite the bearish sentiment, the price pushed up on Saturday, rising by 5.72% and settling at $241.69. 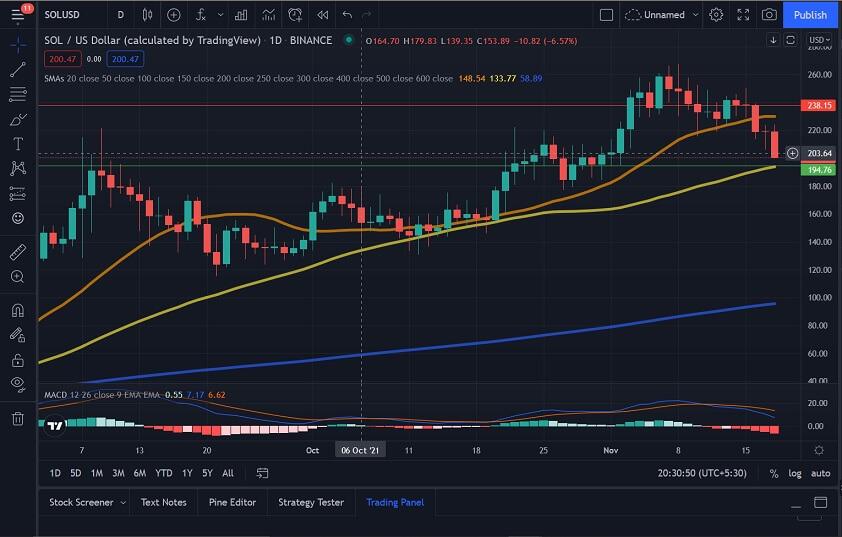 The Solana price fell back into the red on Sunday, as it dropped by 1.28% and settled at $238.59. Monday saw SOL register a marginal drop before falling by almost 8% on Tuesday, slipping below the 20-day SMA and settling at $219.28. SOL registered yet another marginal drop on Wednesday before falling by over 8% on Thursday as sellers look to push the price below $200. Currently, we can see that SOL is at $200, and with the MACD currently bearish, we could see the price drop further. 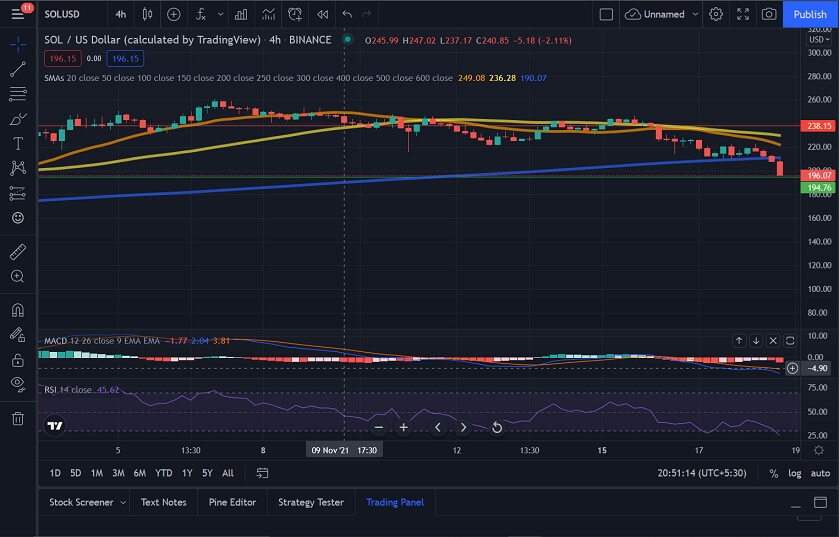 Currently, we can see that the RSI has slipped below the neutral zone, indicating that the price could recover as buyers return.

Alex Kruger, a veteran trader, recently voiced his concerns over Ethereum’s future in the coming years. The economist is worried that the second-largest cryptocurrency is doing a lot simultaneously and could be the perfect recipe for failure.

“Bitcoin + Solana > Ethereum. It’s just common sense. Ethereum is trying to do it all itself. That’s how you fail. Bitcoin will always be safer and more decentralized. Solana will always be faster and cheaper.”

Ethereum’s wide use case scenario, ranging from DeFi, DApps, and NFTs, has seen it rise to occupy over 19% of the crypto market. Ethereum has often adopted a trial and error method, which is evident in the network’s over 13 hard forks in under seven years. Then, there’s the problem of soaring gas fees that threaten the very existence of the network, leading to the transition to Proof-of-Stake – Ethereum 2.0.

Kruger’s theory was supported by Dan Held, Growth Lead at Kraken. who said that the Ethereum scenario is the “classic startup problem of trying to do/be everything at once, but not doing one thing really well.” Kruger’s hypothesis may stem from the fact that Bitcoin has performed spectacularly well in its role as a decentralized network while Solana zeroed in on costs, speed and scalability. Bitcoin’s simplicity has seen it become the leading crypto asset for over 12 years, while Solana’s features have seen it climb up the crypto ladder after a stellar performance in 2021.

Kruger’s comments drew the ire of Ethereum’s supporters as they poked holes in the theory. They argued that Ethereum would survive the test of time because of its “nimbleness” and innovativeness. The thriving layer-two ecosystem on Ethereum building upon a solid foundation is an indicator that the network would succeed.

Other pointers include the network recording its first consecutive week of deflationary issuance and the giant strides that it has taken towards the switch from Proof-of-Work to Proof-of-Stake. Like Bitcoin and Solana, Ethereum has set multiple all-time highs in recent weeks and has set its sights on $5K.

Looking at the Solana price chart, we can see that SOL has slipped below $200. The price could find support at around $194, where the 50-day SMA is present. However, if sellers manage to pierce this level of support, then we could see the price drop below $190.