The Solana price was back in the green, as buyers pushed up SOL significantly over the weekend. SOl had dropped to $176.94 on Wednesday, registering a drop of 0.93%. Friday saw the price continue to drop, as SOL fell by 0.71%. However, the weekend saw SOL make a strong recovery, as the price rose by over 4% and settled at $182.93. The ongoing session sees SOL at $185, currently up by over 1%.

The Solana price started the previous weekend on an extremely bearish note, registering a drop of almost 8% on Friday. SOl recovered over the weekend, rising by 2.52% on Saturday and 0.56% on Sunday to end the weekend at $172.99. However, SOL was back in the red on Monday, as the price dropped by over 10%, dropping to $155.22. Despite the bearish start to the week, SOL was back in the green on Tuesday, as the price registered an increase of over 4% and moved to $161.46. 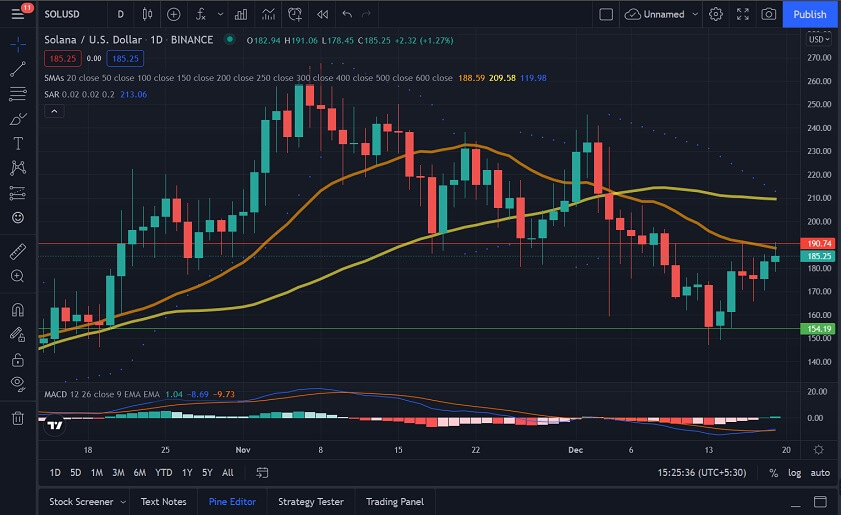 We can see that the Parabolic SAR and MACD are both bullish, indicating that we could see the price rise further.

The Solana blockchain network has had a good year in 2021. Massive adoption of the blockchain has seen the price of its native token SOL become one of the best performing cryptocurrencies this year. Despite this success, the Web3-focused blockchain is still gunning to gain more use cases that will bring in more adoption. The next the network appears to be aiming to conquer is Web 3 gaming.

Commenting on Twitter, Dylan Macalino, the founder of Ship Capital, stated that for Solana to onboard 1 billion Web 3 users, it needs to focus its energy on improving gaming on the platform.

In response, Solana co-founder Raj Gokal expressed his confidence in the ability of the infrastructure Solana already has on the ground to meet the requirements for the growing gaming use cases of Solana. He noted that the network does not need to optimize its base layer but can focus its energy where it is required. He added that if gaming is an area that needs that attention, then the firm will focus on it.

Gokal’s assertion appears to be the sentiment of Solana Labs, the developers of Solana. The investment arm of the blockchain, Solana Ventures, earlier announced the launch of a $150 million fund in partnership with Forte and Griffin Gaming Partners aimed at investing in Web 3 game builders.

Looking at the Solana price chart, we see that SOL has pushed up significantly over the weekend. If buyers can continue to retain control of the session, we could see SOL push towards $190.