The Tron price’s slide showed no signs of stopping during the ongoing session, with TRX down nearly 9% at the time of writing. TRX had registered a significant drop of over 10% on Friday, dropping to $0.060. The price continued to drop over the weekend, dropping by nearly 7% on Saturday, dropping to $0.056, before registering a marginal recovery on Sunday and ending the weekend at $0.057. The current session sees TRX back in the red, with the price down to $0.050.

The Tron price was relatively bullish over the previous weekend, registering an increase of 1.69% on Friday. The weekend saw TRX remain bullish, as the price rose by 1.48% on Saturday and then reported an increase of nearly 2% on Sunday to end the weekend at $0.069. TRX pushed to $0.070 on Monday but fell back from this level on Tuesday, thanks to the 20-day SMA acting as resistance. TRX fell by over 3% on Tuesday, falling to $0.068, before recovering on Wednesday and settling at $0.069. 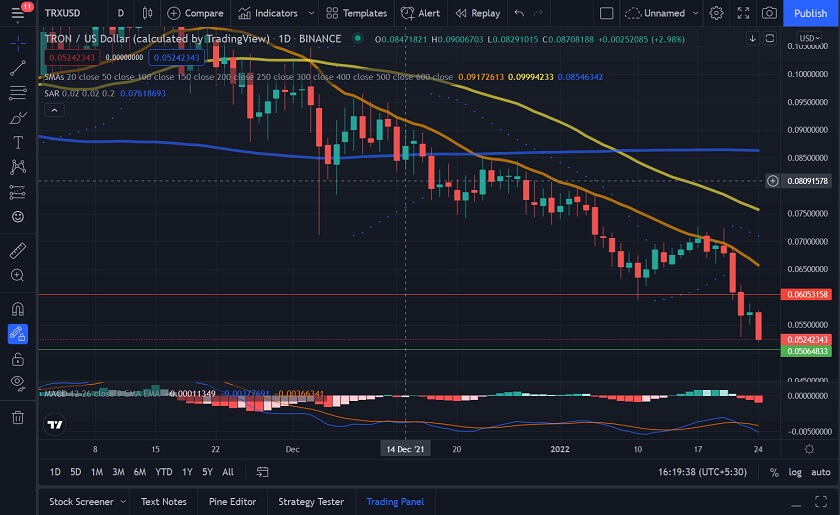 The Tron price fell back in the red on Thursday, dropping by nearly 2% and falling to $0.067. Friday saw the price drop considerably, as TRX fell by over 10% to $0.060. The weekend saw TRX remain in the red on Saturday, falling below $0.060 after registering a drop of nearly 7%, before registering a marginal recovery on Sunday and settling at $0.057. However, the price fell back in the red during the ongoing session, slipping to $0.052. 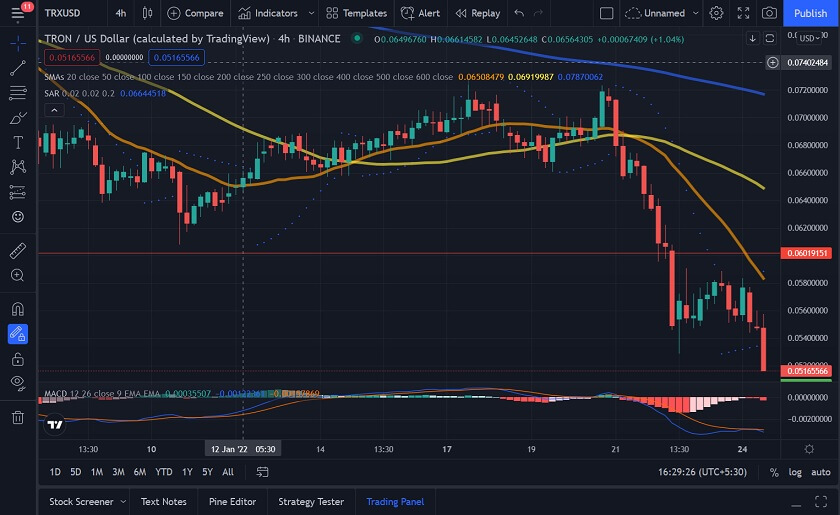 Looking at the 4-hour Tron price chart, we can see that TRX had pushed up to $0.071 on the 17th. After reaching this level, the price turned bearish, falling to $0.069 and then slipping below the 20 and 50-bar SMAs and settling at $0.066 on the 19th. TRX was able to make a strong recovery from this level, pushing back above the 20 and 50-bar SMAs and moving to $0.071 on the 20th. However, TRX turned bearish after reaching this level and fell back drastically, slipping below both SMAs and dropping to $0.065. The price continued to drop from this level and dropped to $0.054 on the 22nd. The price pushed back up from this level and rose to $0.058 before dropping to its current level of $0.052.

Looking at the Tron price chart, we see that TRX has been extremely bearish over the past few sessions and has dropped significantly during the ongoing session. If the current bearish sentiment persists, we could see TRX drop to $0.050.