Bitcoin’s Biggest Critics And Are They Really Wrong?

Without doubt, with the arrival of Bitcoin back in 2009, a lot of things have changed, transformed and reimagined on the financial landscape of the world.

Many people were attracted to the concept of Bitcoin and new cryptocurrencies started popping out each day, each with new and exciting features.

And although change seemed promising, there have always been those that have felt differently. Even some that have always felt that cryptocurrency is a scam.

To a degree, some are right, there have been scams in the crypto industry and plenty of illegal activity, especially in the early days.

But do Bitcoin’s critics have anything else to say?

In this article, we’ll look at what Bitcoin is and what do Bitcoin critics have to say as well as if they are right or wrong. 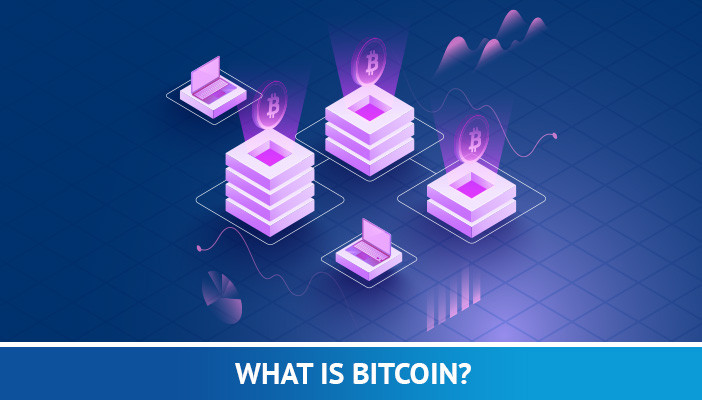 Bitcoin is a decentralised, peer-to-peer ‘digital money’ (cryptocurrency) system that allows online users to process transactions on the Bitcoin blockchain, without using a central bank or any other administrator.

The way Bitcoin payments are processed is by a private network of computers, all linked through a shared program.

A transaction is simultaneously recorded on a ‘blockchain’ on each computer that updates and informs all the accounts.

Before we get down to the core of this article, though, let’s remind everyone why Bitcoin became a revolutionary force on the financial landscape and challenged the traditional ways of banking and transferring money to one another.

What do the Bitcoin’s critics say? 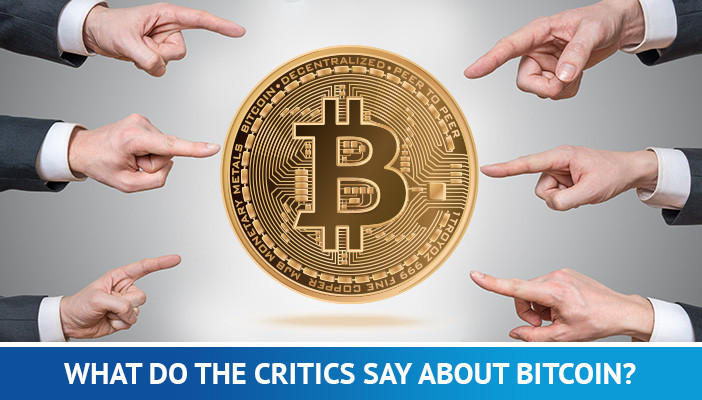 Despite so many people jumping on the Bitcoin bandwagon, there are still a lot of financial experts, governments, leaders, everyday people, etc. who speak against Bitcoin.

The biggest criticism of Bitcoin (and cryptocurrencies in general) must face is the argument that “Bitcoin is not money”.

Economists, in particular, have criticised Bitcoin many times, claiming that we shouldn’t consider Bitcoin a revolution but merely a “waste of resources”.

Are these Bitcoin critics missing the big picture? Probably, yes.

He also mentioned that Bitcoin has no inherent value and its tremendous volatility and price swings are the reason why Bitcoin can never be used as a store of value or means of payment by any business.

Despite his views, Harris’ former company doesn’t seem to share his views on Bitcoin. PayPal has filed for a patent that will shorten transaction time involving cryptocurrencies.

PayPal has proposed an implementation of a secondary wallet with special private keys which can be swapped during transactions.

On top of that, PayPal and was briefly involved in Facebook’s Libra project as well, which is also contradictory.

Could it be that Harris is simply a Bitcoin critic because it is a rival to PayPal? Maybe the only kind of Bitcoin they agree with is one that they can control?

Donald Trump is ‘not a fan’

Back in July 2019, Trump criticised Bitcoin and cryptocurrency in general on Twitter.

He said that “Bitcoin and other cryptocurrencies [...] are not money” before going on to claim, “Unregulated Crypto Assets can facilitate unlawful behaviour”.

A keyword to pick out there is ‘unregulated’, which may mean he is looking into implementing regulation

Most of his criticism towards cryptocurrency was a response to Facebook’s Libra, which at the time was big news.

While it is highly likely that Trump doesn’t know much about the benefits of Bitcoin, his opinions do matter as he is a world leader.

If the US moves to ban Bitcoin and cryptocurrencies, it would be a big blow to the market. The US is home to many cryptocurrency projects and companies, as well as many users.

Other nations will likely follow Trump’s lead if he does so.

It’s also important to point out that Trump's viewpoints on cryptocurrency are not that insane, in fact, it wouldn’t be surprising to find out that many other politicians would agree with him.

After all, political figures tend to know little about cryptocurrency and are more likely to know only the negative, criminal side.

Why do Bitcoin critics believe it is a scam? 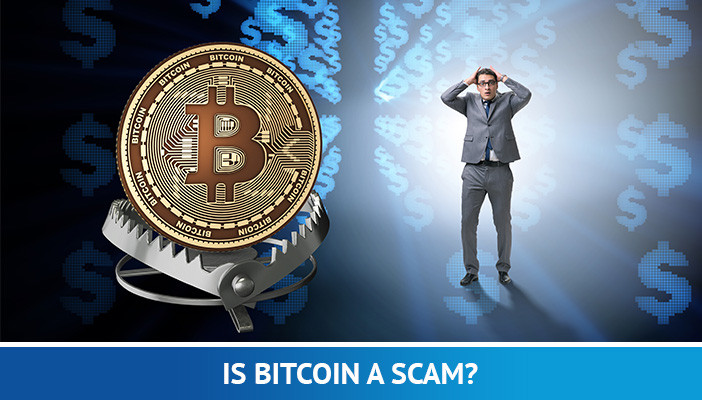 Some people state that Bitcoin is a Ponzi scheme because the creator, Satoshi Nakamoto, owns such a large portion of Bitcoin, approximately 1 million.

This is typical of pump and dump schemes. If Nakamoto was to sell all their Bitcoins, the price would plummet, and they would make an enormous profit.

Does Bitcoin work as envisioned?

Aside from the Bitcoin critics that call it a scam, there are many more that don’t believe that it really works.

For a start, many claim that Bitcoin is not faster than traditional methods as it can take time for a transaction to be processed.

Bitcoin critics love to point out that the network can only handle 7 transactions per second, while Visa can manage up to 24,000 per second.

While this is true, several factors also need to be considered. Firstly, Visa never actually reaches 24,000 transactions per second, that is the maximum it is capable of.

Secondly, technically speaking, while Bitcoin is slower in processing transactions, it is faster at confirming them. With Visa, transactions typically take days to be confirmed.

And thirdly, with the adoption of the Lightning Network, Bitcoin is a lot faster and can now be used to make microtransactions.

Is Bitcoin too volatile?

Yes, the Bitcoin critics are right.

Bitcoin is perhaps the most volatile market instrument out there today. Because of this, it means that it cannot be used as a store of value and for everyday use.

There is also the potential issue that Bitcoin might be in a bubble and may explode. Of course, though, this assumes that Bitcoin is already overvalued.

Bitcoin mining is too costly

This is true in both the sense that it expensive to mine coins and it impacts on the environment.

It is predicted that Bitcoin mining uses more power than Ireland or even Bangladesh, a country with a population of over 164 million people.

This is a genuine critique of Bitcoin and is an issue that needs to be solved. However, it may be the case that the Lightning Network may lower the cost of Bitcoin transactions.

There are plenty of Bitcoin critics who argue that Bitcoin has no intrinsic value at all as it is not tied to anything.

This is simply not true. Bitcoin’s value is tied to how it can be used, and the work done to create it; mining.

If you dive deep into the real value of things, you will see that most currencies are not tied to any value.

The US dollar, for example, hasn’t been tied to anything since 1971.

Are the Bitcoin critics right? 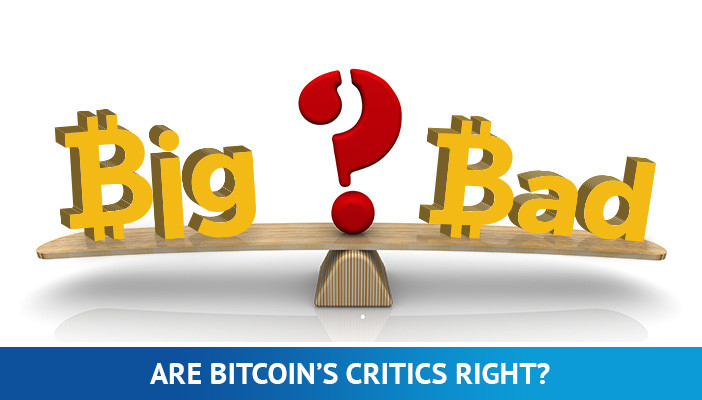 Their opinions do matter because they have influence and people listen to them.

Most of Bitcoin critics are misinformed and still look at cryptocurrency as a way to perform illegal activity.

While some illegal activity does take place with Bitcoin, particularly in the beginning with Silk Road, those days are mostly behind Bitcoin and are largely exaggerated.

It should also be remembered that the US dollar is the preferred currency for criminal dealings.

And for criminals, it makes more sense to use physical US dollars because it is harder to trace than Bitcoin, where all transactions are stored on a public ledger and openly displayed.

Bitcoin is not a scam, though there are plenty of Bitcoin scams out there.

One of the most recent scams involved QR code generators. QR codes are used when people send cryptocurrency to one another via mobile wallets.

There were several fake QR generators that instead of generating a QR code to use, just used the scammers QR code and so cryptocurrency was sent to their virtual wallet.

This is a big problem for Bitcoin as it doesn’t help its image.

Only time will tell

Bitcoin is still new, of course, there will be critics and issues to solve. As time goes by Bitcoin critics will see the benefits or be proven wrong, some already have.

It is still too early to know if all issues will be solved, but there is progress.

Learn to trade Bitcoin with our cryptocurrency trading course