The Cardano price has made a fairly strong increase during the ongoing session, as buyers pushed the price above $1.05. ADA had been quite bearish over the weekend and had registered a drop of nearly 2% on Saturday, falling to $1.07. Sunday saw ADA continue to drop, falling to $1.04, before recovering on Monday, registering a marginal increase. The current session sees ADA up by over 4%, with sellers in control of the session.

The Cardano price started the previous weekend on a bearish note, dropping by 1.23% on Saturday before recovering on Sunday, pushing above the 20-day SMA and ending the weekend at $1.14. Monday saw ADA continue to push higher, as it rose by almost 5% and moved to $1.19, before dropping back on Tuesday, falling to $1.17 after a fairly volatile session. Wednesday saw ADA recover, as the price rose to $1.19, before dropping back on Thursday, falling by over 3% and settling at $1.15. 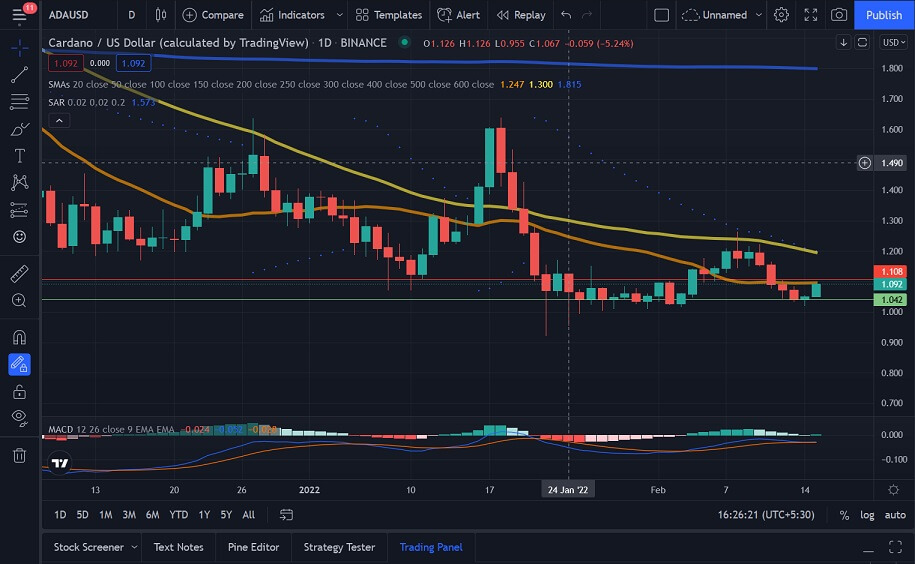 On Friday, the Cardano price continued to drop, registering a significant drop of nearly 6%, slipping below the 20-day SMA and falling to $1.09. The weekend saw ADA remain in the red as it dropped by almost 2% on Saturday and then by nearly 3% on Sunday, ending the weekend at $1.04. The current week started on a positive note for ADA, as it registered a marginal recovery on Monday before pushing up by over 4% during the ongoing session.

IntoTheBlock’s IOMAP for the Cardano price shows that ADA has strong support at around $1.04. At this price level, over 297,000 addresses have bought more than 6 billion ADA. 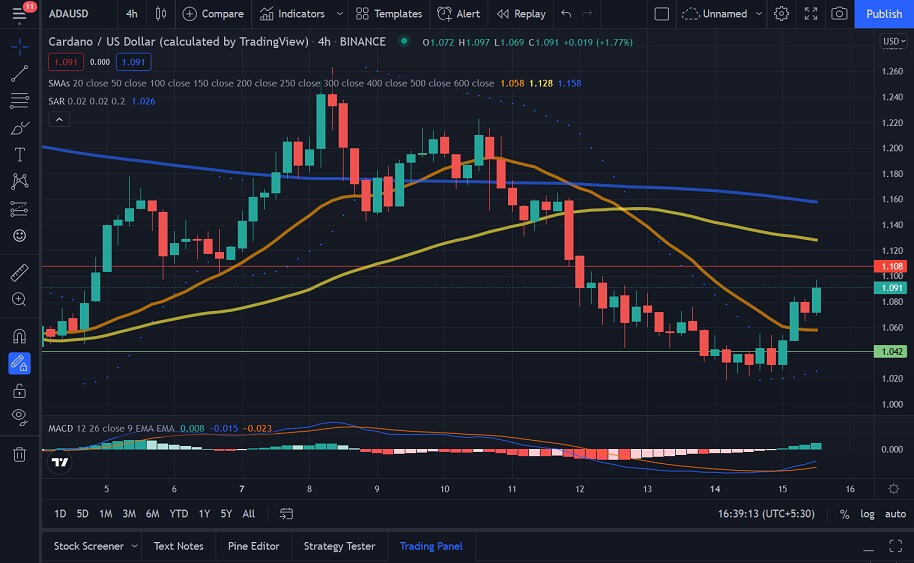 Cardano has achieved major recognition of its market value. Google recently added ADA to its currency conversion rate calculator. Users of the search tool can now convert ADA to various fiat currencies, including USD, GBP, EUR, and many others.

With this move, Google confirms that Cardano has become one of the major cryptocurrencies that are widely utilized. Investors may conveniently use Google’s infrastructure to perform a close price calculation of ADA without relying on other services. Users who are still oblivious of Cardano may be more willing to learn more about it following the new integration.

Although Cardano’s integration in the search tool isn’t likely to directly affect ADA’s market valuation, it can still be essential for a broader audience. As Cardano uses a proof-of-stake algorithm, the higher number of users will improve the platform’s resilience. The integration makes ADA accessible to locals of both developed and developing countries. Therefore, the crypto market may become better incorporated as a result of such initiatives.

Cardano's SundaeSwap DEX has reached a new milestone after crossing the $100 million mark in total value locked. Total value locked (TVL) is the overall value of crypto assets placed in decentralized finance (DeFi) protocol or DeFi protocols generally. It has become an important statistic for evaluating interest in this particular segment of the cryptocurrency market.

SundaeSwap is the first decentralized cryptocurrency exchange on the Cardano blockchain. Even though it only launched in January 2022, it has seen significant growth, with many traders using the platform for trading, swaps, and yield farming.

Bitrue, a leading cryptocurrency exchange, has announced the addition of SundaeSwap token (SUNDAE) to the list of supported assets. SUNDAE's inclusion on the industry-leading exchange is a significant step forward in the global acceptance of the Cardano ecosystem's tokens.

The Cardano network recently burst with a surge in on-chain transaction activity. According to current data from DeFi Llama, the rise in the transaction count amounted to a TVL of $108.43 million on SundaeSwap.

DeFi Technologies has received approval to trade Polkadot (DOT) and Cardano (ADA) exchange-traded products (ETPs) on the Boerse Frankfurt Zertifikate AG (Frankfurt Stock Exchange) through its subsidiary Valour. In a press statement, the company stated that the product would be dubbed Valour Polkadot (DOT) EUR and Valour Cardano (ADA) EUR. Trading in the ETPs began on Monday, February 14, 2022.

The Valour Polkadot (DOT) EUR ETP will track the value of DOT. This comes after the network embarked on significant development like integrating the Ethereum Virtual Machine to its parachain network. Elsewhere, the Valour Cardano (ADA) EUR ETP will track the performance of ADA. The company cited Cardano’s choice of cost-effectiveness as a driver for launching the product.

Additionally, Valour CEO Tommy Fransson stated that the product launch is based on increased interest. According to Fransson:

“We are expanding our product offerings in the large German market through these listings on Boerse Frankfurt. In Scandinavia, where Valour Polkadot and Cardano are already listed, we have seen a big interest in these crypto assets. We look forward to empowering more investors throughout Europe to have access to leading industry ETPs."

Looking at the Cardano price chart, we see that ADA has made a fairly strong increase during the ongoing session. If the current sentiment persists, we could see ADA push past the 20-day SMA. However, if sellers are able to push the price down, we could see ADA drop below $1.05.