After breaking the $40k resistance on February 28th, Bitcoin (BTC) has been consolidating around $43,262 for the last 48-hours. This is a good signal for the number one crypto, given that geopolitical and macroeconomic conditions have caused weakness across markets. If Bitcoin sustains momentum above $43,200, it has a good chance of maintaining the upside momentum that started towards the end of February.

After a massive rally towards the end of February, the Binance coin (BNB) has consolidated since March 1st. On March 2nd, BNB was oscillating around the 20-day MA. However, volumes have been dropping, and the 20-day and 50-day MA have now converged. This is an indicator that a breakout is imminent. 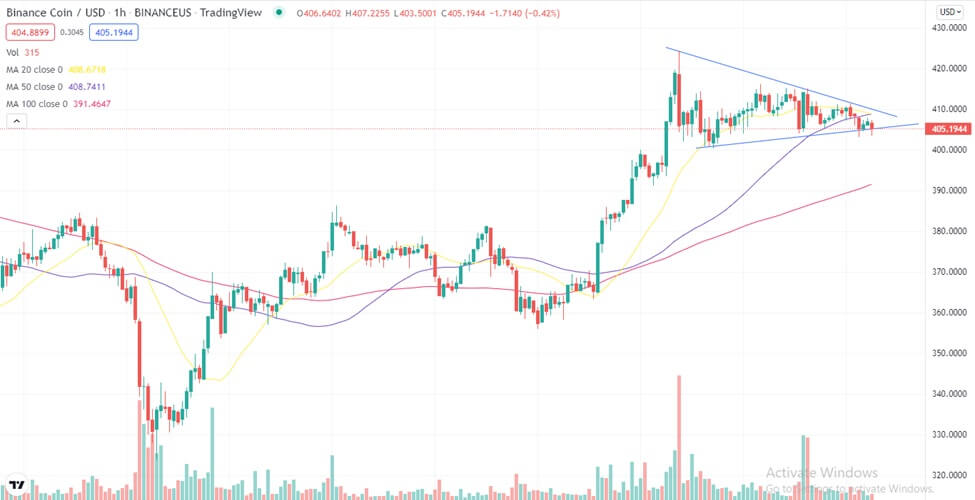 If bulls are able to decisively breakout out of this narrow range and push through the March 1st high of $424.9, then it would be an indicator that bulls are firmly in control. A rally could follow, similar to the one experienced towards the end of February.

However, if bears take control in the day and push BNB below $402.7, there could be a risk of a selloff. The bear trend would be confirmed if BNB breaks the 100-MA at $391.3. If BNB bears can clear $391.3, more selling could be experienced.

Like the rest of the market, Ripple’s XRP (XRP) was strongly bullish on February 28th. However, since March 1st, XRP has been consolidating between the 50-day MA at $0.7726 and the 100-day MA at 0.7578. Current XRP price action is an indicator that a breakout is imminent. 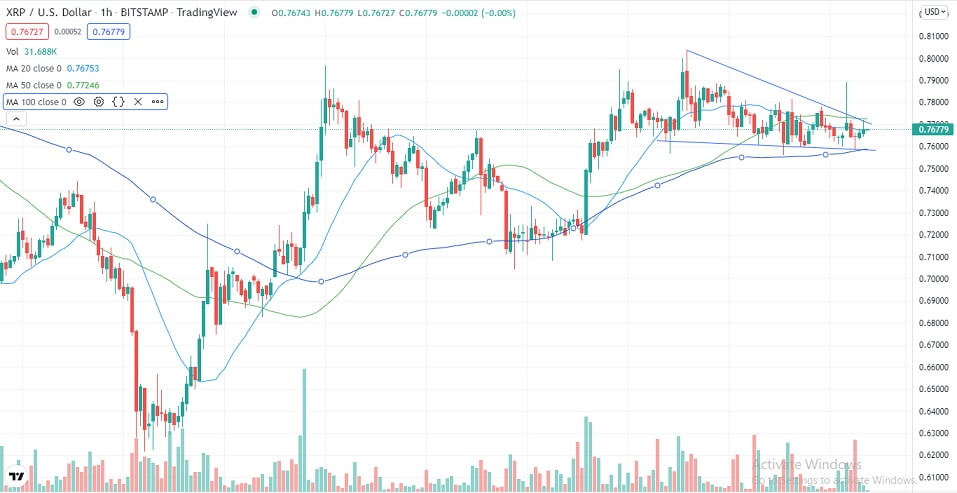 If XRP breaches the 50-day MA, it would suggest that buying volumes are on the rise. In such a scenario, a rally like XRP experienced on February 28th could play out again.

However, if selling pressure pushes XRP through the 100-day MA at $0.7578, it would be a signal that bears have taken control. In such a scenario, a significant selloff can be expected.

There is also the possibility of the current accumulation period continuing. This is likely to be the scenario if volumes remain low.

After a minor rally on February 28th, Cardano (ADA) has been trending downwards, albeit with low volumes.

Selling volumes started drying up on March 2nd, putting ADA in a narrow channel. This is an indicator that a breakout is imminent for ADA. 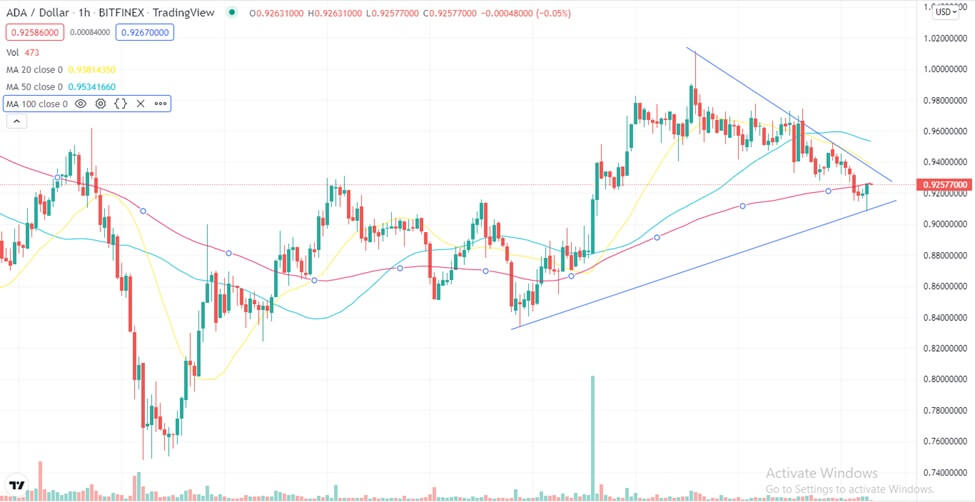 ADA has bounced off the lower-bound trend line at $0.907 and seems to be gaining upside momentum as the day progresses. However, for an uptrend to be confirmed, ADA would have pushed through the 50-day MA at $0.959. If this scenario plays out, then $1 or more per ADA is a possibility.

However, if ADA breaks the lower-bound trend line at $0.907, it could mean that bears are firmly in control and that a selloff is imminent. In such a scenario, $0.86 could be within reach.

Avalanche started March in a consolidation after a rally on February 28th. However, as the day wore on, bears took control. Since then, Avalanche (AVAX) has been trading in a bearish channel. All through March 2nd, AVAX was bearish, albeit with low volumes.

However, early in the day on March 3rd, AVAX hit strong support at $82.08. It has bounced off this support and broken out of the upper-bound trend line at $82.51. It’s an indicator that AVAX could be in the process of a bullish breakout. 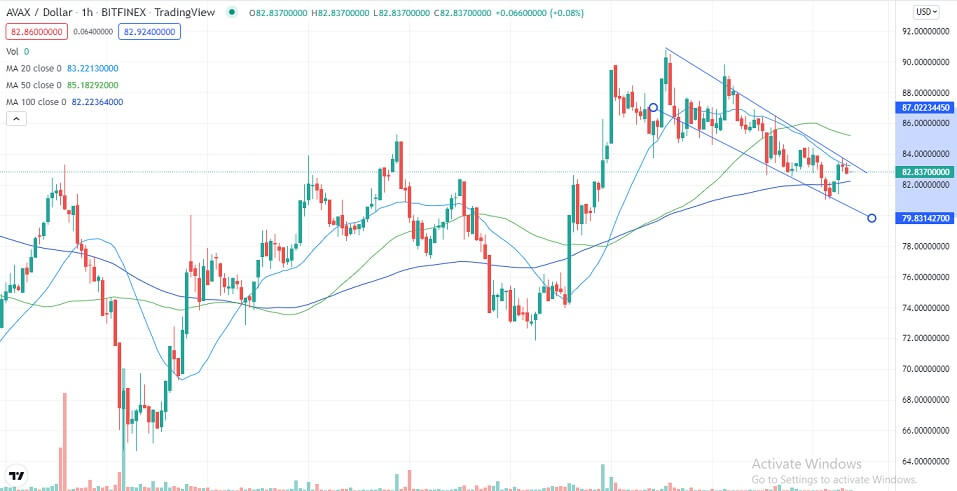 If bulls sustain momentum and push AVAX through the 50-day MA at $85.28, there could be a high chance AVAX testing $90 or more within the day.

However, two scenarios could play out if bulls fail and AVAX falls back to the 100-day MA at $82.07. The first would be where volumes drop, and AVAX trades consolidate around the $82.07 to $83 price range.

On the other hand, if selling volumes increase, then prices below $78 could come into play.

Terra (LUNA) ended February on a high note. By the end of the day on February 28th, LUNA was up by over 60%.

However, since March 1st, it has been consolidated between the upper bound at $96.30 and the lower bound at $89.79. LUNA is yet to show a clear breakout in any direction. 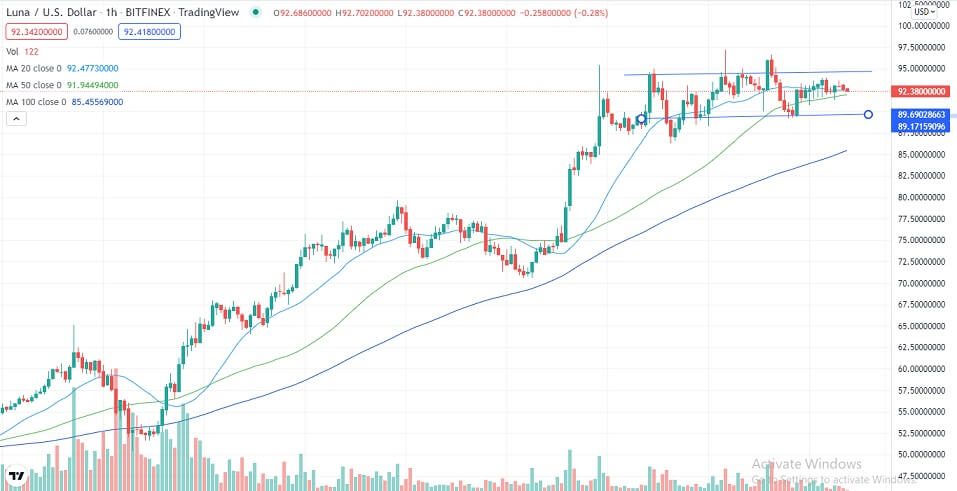 Currently, LUNA is on the rise, but volumes are still low. If buying volumes rise, and LUNA rallies through the $96.30 resistance, it would indicate a bullish breakout. In such a scenario, LUNA could see prices above $100.

Dogecoin (DOGE) is currently trading in a narrow channel. Dogecoin is facing strong resistance at the 50-day MA at $0.1332. On the lower side, Dogecoin has some strong support on the 100-day MA at $0.1298. Based on this price action, Dogecoin is poised for a breakout in any direction. 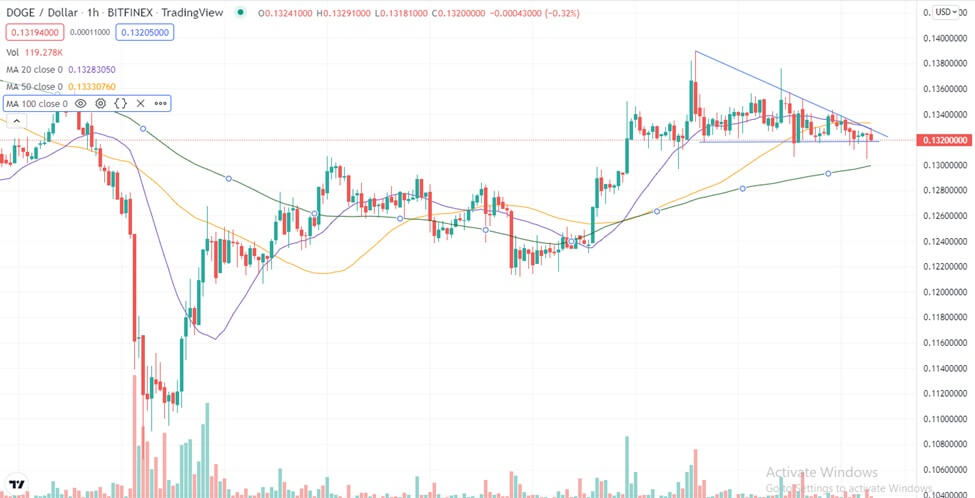 At the moment, Dogecoin bears are taking control. If they push Dogecoin through the 50-day MA at $0.1332, a selloff could ensue with $0.1250 as the next major target.

On the other hand, if buying volumes increase and Dogecoin blows through the 50.0% Fibonacci resistance at $0.1322, then $0.142 would be within reach in the day.

Shiba Inu (SHIB) made a high of $0.00002859 on the afternoon of March 1st. Volumes then dropped, and in the latter part of March 1st and 2nd, Shiba Inu was trending lower in a narrow channel.

However, selling volumes seem to be drying up just above the 100-day MA support at $0.00002540. Based on this price action, Shiba Inu could break out soon. 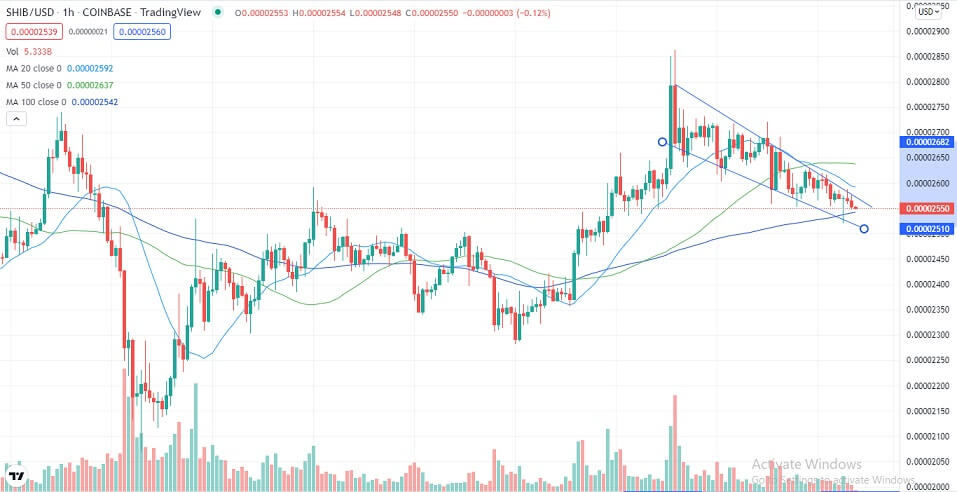