The same bearish trend continued on March 4th bearish, as volumes dropped. The total market cap is down by 4.21%, to stand at $1.8 trillion.

With most cryptos struggling at key resistance levels, there is a strong possibility that the bear trend that has characterized the market since March 1st could continue in the short term.

That said, crypto is a volatile market, and a sudden increase in buying volumes, especially for BTC, could trigger a bullish reversal across the market. With this in mind, let’s now analyze charts for 7 top cryptocurrencies and find out where they could go next.

Binance Coin (BNB) was in a bearish channel through March 3rd. BNB made lower highs all through the day, a factor that reinforced bearish sentiment. On March 4th, bears regained control after another lower higher, further supporting that BNB is bearish. 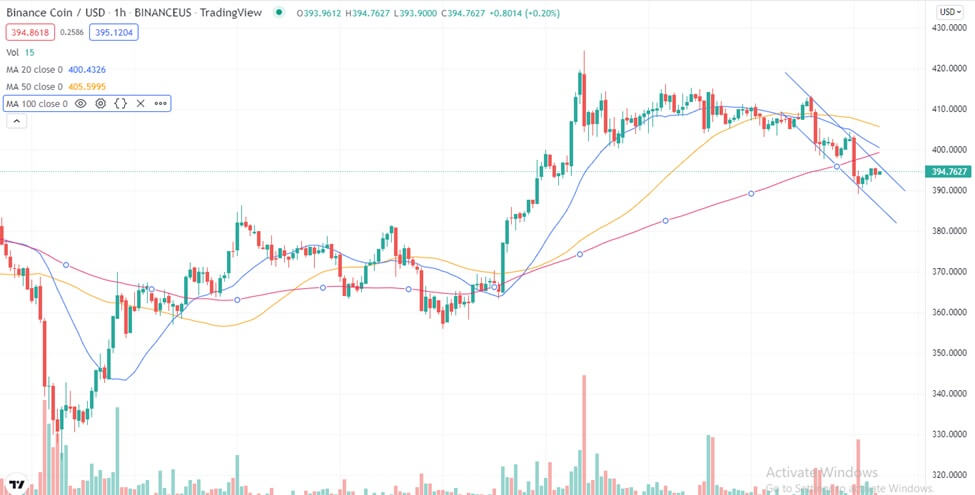 If bears sustain momentum, bulls are expected to put some resistance around $391, as BNB trades in a narrow but strongly bearish channel.

The 20-day MA is already turning downwards, an indicator that bearish momentum is rising. If the 20-day MA crosses the 100-day MA from above, it would be confirmation that bulls have lost the battle. This could see Binance Coin test prices below $380.

This bearish outlook would be invalidated if selling volumes drop and the 20-day MA starts to flatten out. However, bears would likely put up a strong fight at the 100-day MA resistance at $399.3.

If bulls win and push BNB through the 100-day MA, then sustain momentum through the 50-day MA at $405.7, BNB could break out of the current bearish channel, and $420 or more would come into focus.

All through March 3rd, XRP was trading in a bearish channel and was making lower highs. The same trend has continued on March 4th, but bears are fighting hard at $0.7428 on the resistance line of XRP’s current trading channel. 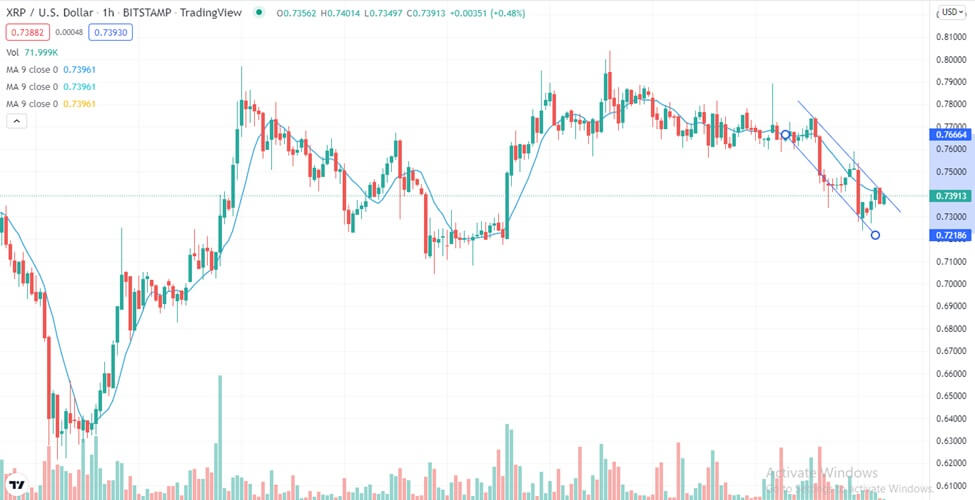 If bears gain control and push XRP back to $0.729, bulls could put up a challenge around that level. If they lose, then the selloff could continue, with the next possible price target at $0.7154, a critical weekly support level.

Cardano (ADA) was trading in a bearish channel all through March 4th. ADA made lower highs throughout the day, and the same price action has continued on March 5th. Bulls were putting up a spirited fight at the support level of the bearish channel at $0.863. 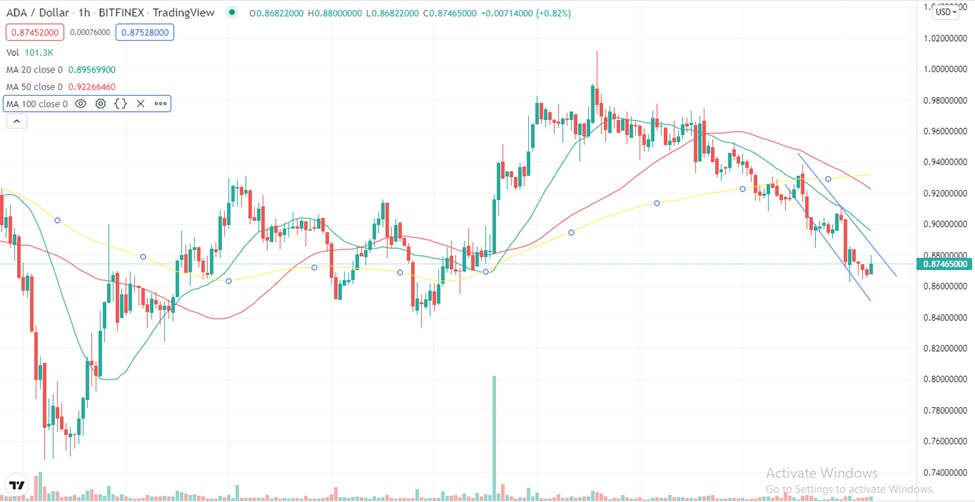 If bullish momentum increases, bulls can expect to encounter a lot of resistance at $0.895 - the resistance level of the current trading channel.

However, all indications are that bulls may have a hard time breaking through the $0.895 resistance. Not only is the broader market bearish, but ADA technical indicators are pointing to a potential bearish continuation pattern. The 50-day MA is currently cutting the 100-day MA from above, an indicator that bears are firmly in control.

Avalanche (AVAX) was trading in a bearish channel on March 3rd. On March 4th, AVAX hit strong resistance at $78.26, the resistance of the current AVAX trading channel. However, volumes were thinning out, indicating that bulls were losing momentum.

If, by any chance, bulls gain control and push AVAX through the $78.26 resistance, the 100-day moving average at $82.44 would be the next battleground for bulls. If they can garner enough volumes at this price level, $85.38 would come into focus. All indicators are that bears in control, though.

If bears manage to push AVAX through the $75.34 key support level for the bearish channel, the next target for AVAX would be $72.82, a key weekly support level.

After a strong rally that started towards the end of February, Terra (LUNA) has consolidated for the better part of March. On March 3rd, LUNA traded in a tight range, an upper bound at $93.49 and a lower bound of $87.99. LUNA has continued with the same range-bound trading on March 4th. 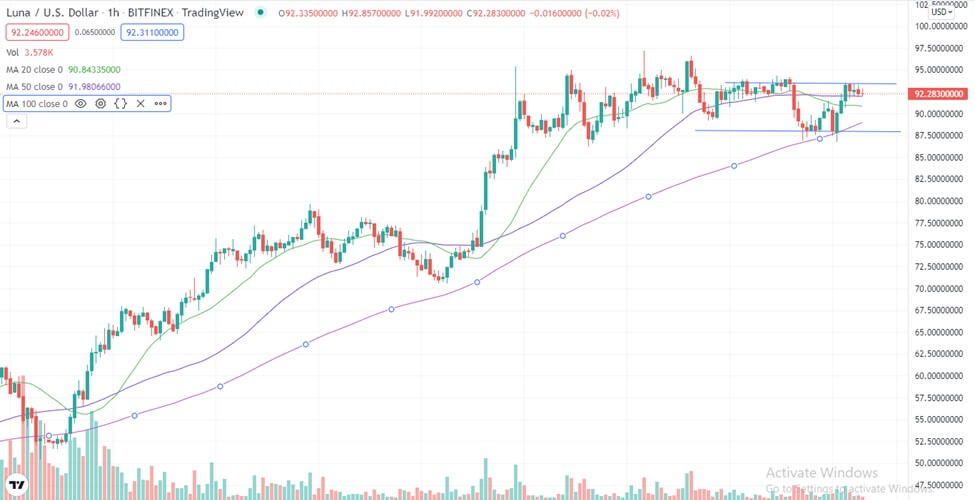 LUNA bulls have lost momentum on the resistance of the range-bound channel at $93.49. However, if bulls were to put up a fight and push through the $93.49 resistance, then $100 could be in focus.

However, if the current price action continues and buying volumes dry up, LUNA could retest the support of the range-bound trading channel at $87.99. While bulls are likely to put up a fight at $87.99, if they fail, then a selloff could follow, with a potential target of $70.92, a key weekly support level. 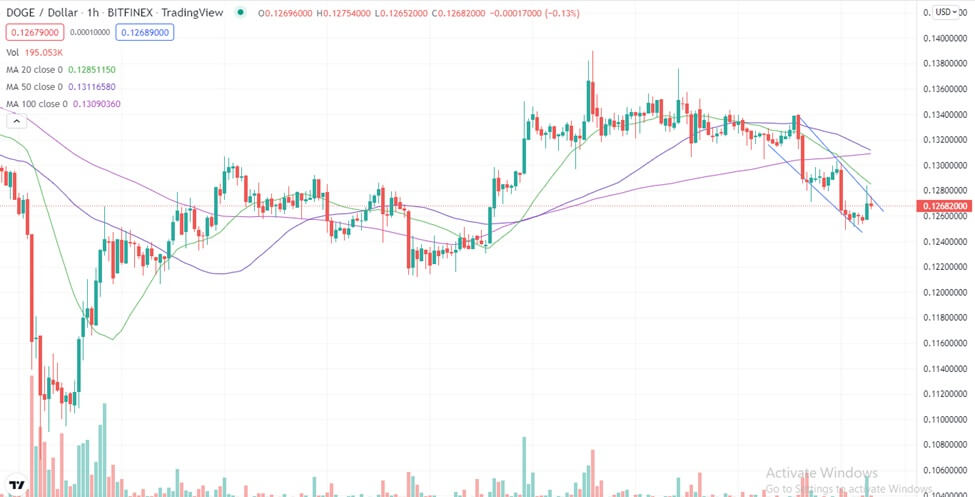 Bulls are putting up a spirited fight on the resistance of the bearish trading channel at $0.1274. If they garner enough volumes and push Dogecoin through the $0.1274 resistance, the 100-day moving average resistance at $0.1308 would come into focus. Breaking this resistance would clear the way for Dogecoin potentially testing prices above $0.14.

This seems unlikely, as moving averages point to an accelerating bearish momentum. The 50-day MA is approaching the 100-day MA from above, usually a bearish signal.

If bears drive Dogecoin back to the support of the current bearish channel at $0.1251, bulls would most likely put up a fight. However, weekly support at $0.1222 would come into focus if they fail.

As volumes dropped, Shiba Inu (SHIB) traded in a narrowing bearish channel all through March 3rd. On March 4th, Shiba Inu was still bearish, but volumes declined, indicating that a breakout is imminent in any direction if volumes flow back. 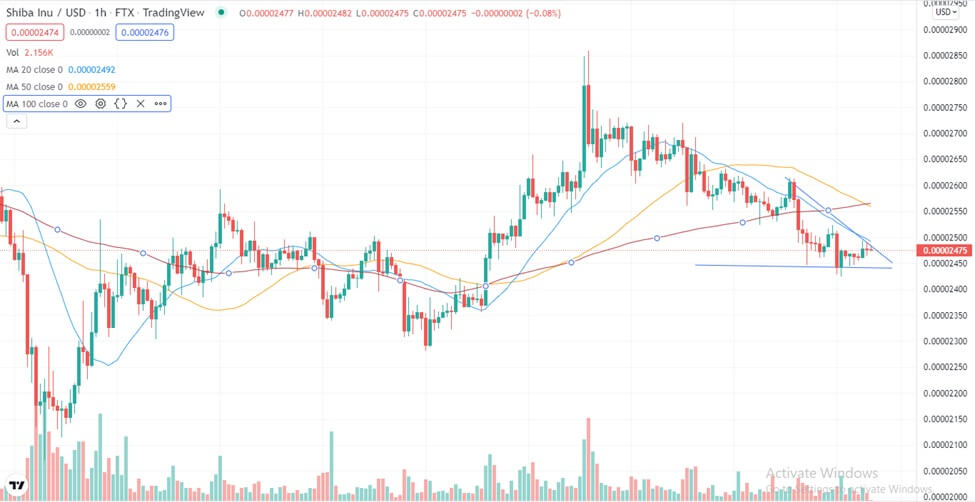 This seems highly unlikely, as the 50-day MA is now cutting the 100-day MA from above. This is a bearish signal and an indicator that bulls are losing momentum.

If bulls lose momentum, bears are likely to have difficulty breaking through the lower bound of SHIB’s trading channel at $0.00002445. If they prevail, weekly support at $0.00002316 would come into focus.