Crypto volumes are thinning out on March 8th, signalling a potential breakout in the short term.

Crypto prices have been trending lower since March 7th, but at the same time, volumes have been in decline. A slight increase in volumes could trigger a breakout in any direction in this environment. The big question now is, could a breakout be imminent, or will we see a continuation of low volumes trading in the short term? Let’s analyze charts of some of the largest altcoins by market capitalization to find out.

Binance Coin (BNB) crashed through the 50-day MA on March 7th. However, bears hit a brick wall of buyers at $365.9, triggering a reversal. Bulls came across a lot of resistance at $382.6 and were unable to push through the massive wall of sellers at this price level. BNB has since traded in a narrow channel between $382.6 on the upper side and $378.8 on the lower side.

If bears sustain pressure on the $378.8 channel support and overpower buyers, they are expected to push the price towards $365.9. Bulls are expected to put up a fight at $365.9, and if they lose, then BNB could test prices below $350 in the short term.

However, if bulls can put up a fight and win at the $378.8 support of the current trading channel, they can easily reverse the price and push it back to the upper bound of the trading channel at $382.6. Bears are expected to fight hard at $382.6, but if they lose, then bulls could push BNB to prices above $400 in the short term.

XRP (XRP) is trending back to the support of the triangular trading channel on March 8th. This is an indicator that every attempt by buyers to push the price higher is being rejected by sellers who are increasing in strength. 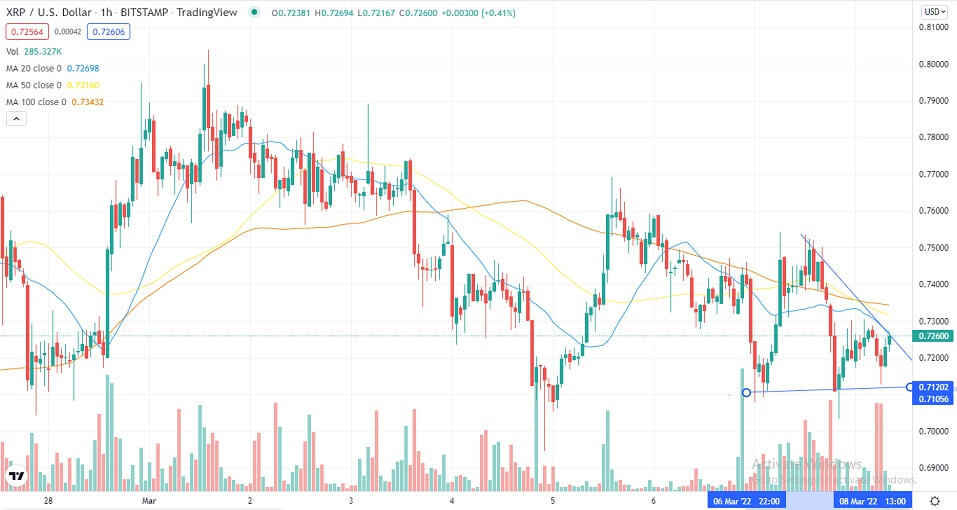 While bears can expect to find massive rejection from buyers at $0.7110 on the channel support, if they win, it would signal that very few buyers believe in XRP in the short term. In such a scenario, bears could push XRP all the way to $0.6900, or lower, in the short term.

However, if the massive wall of bulls currently at $0.7110 on the channel support overpowers sellers, XRP could enter a sharp bullish reversal. If this happens, XRP bulls can expect to battle more bears at $0.7347 on the 100-day MA. If bulls can break through resistance at $0.7347, they could easily push XRP to prices above $0.77 in the short term.

Cardano (ADA) bears were firmly in control on March 7th. However, buyers came into the market in large numbers at $0.784, triggering a price reversal. While bulls remained in control until the early part of March 8th, bears came in quite strongly at $0.811. But with bullish momentum still strong in the market, the two forces have counteracted each other. ADA is now trading in a narrow range between an upper resistance at $0.811 and support at $0.784, with the price now trending towards the $0.784 support. 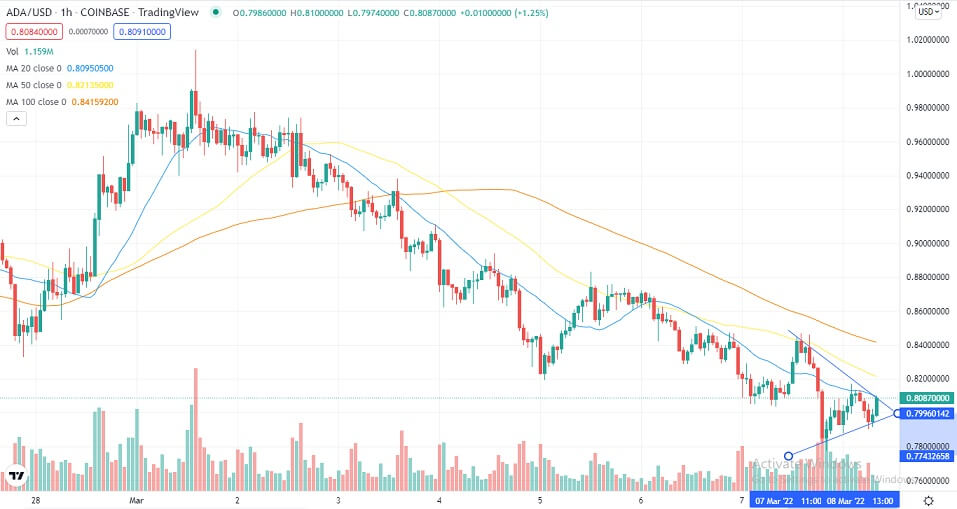 If bears keep pushing the price lower and breach through the wall of buyers at $0.784, then it would mark the end of the range-bound trading that started in late March 7th. In such a scenario, prices below $0.76 could be tested in the short term.

Avalanche (AVAX) has been trading in a narrowing bearish channel since March 7th. This shows that overall volumes are in decline. However, it also means that a slight increase in volumes can trigger a breakout in any direction. 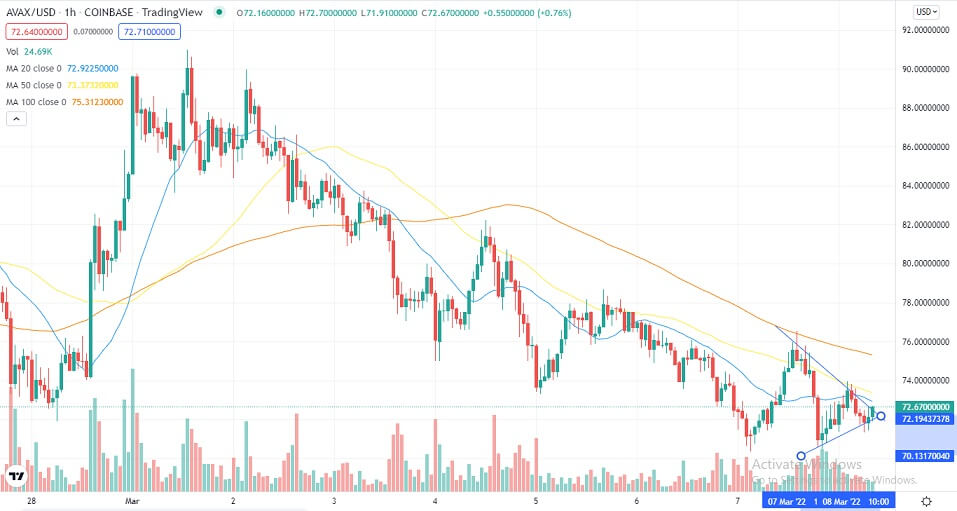 If buying volumes increase, bulls can expect to find major resistance at $73.42 on the 50-day MA. It would confirm a short-term bull trend if they overcame the strong resistance at $73.42. Prices above $79 will be in focus in the short term if bulls sustain momentum above $73.42.

However, if selling volumes increase in the day, it could trigger a bearish breakout. However, bears can expect to encounter some significant push from bulls at $70.55. If bears manage to overcome buyers and push through $70.55, prices below $68 could be within reach in the short term.

Like Avalanche, Terra (LUNA) has been trading in a narrowing bearish channel since March 7th. Similarly, it means that volumes are in decline and that a slight increase in volumes can trigger a breakout in any direction. 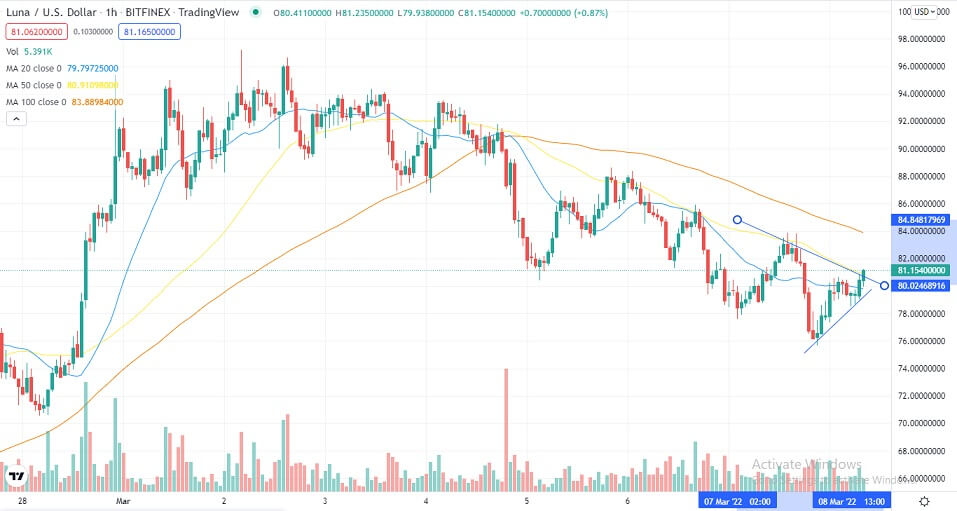 If buying volumes shoot up in the day, the price could rally, but bulls can expect major resistance at $83.93 on the 100-day MA. If bulls manage to fight off bears at $83.93, then LUNA could turn strongly bullish, with prices above $90 possible in the short term.

On the other hand, if selling volumes increase and a downside break follows, then a selloff could follow, with $73.43, a price LUNA last tested on February 28th as the first target.

There was a huge tussle between bulls and bears on March 7th, but overall, Dogecoin (DOGE) volumes declined. On March 8th, Dogecoin volumes continued to drop, indicating that a slight increase in either buying or selling volumes could trigger a breakout in either direction. 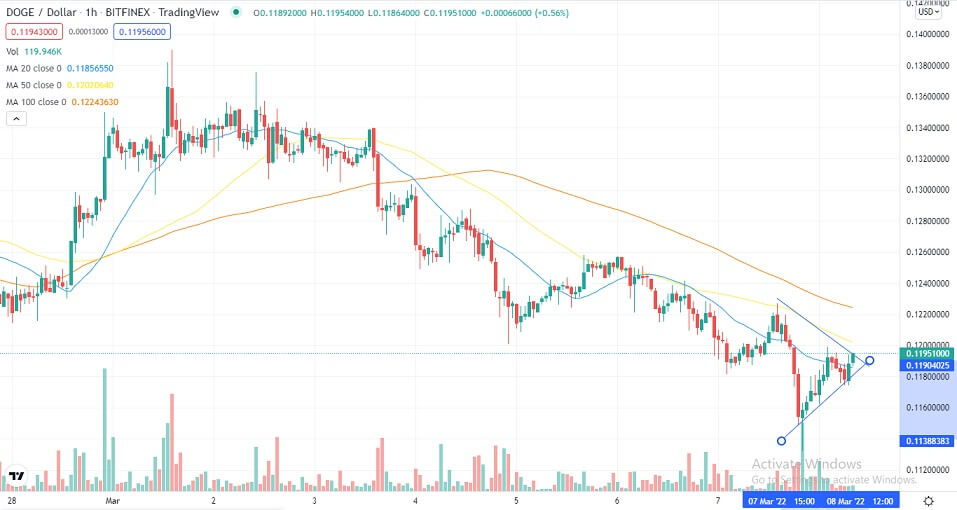 If buying volumes increase and Dogecoin breaks out to the upside, bulls can expect some major resistance from sellers at $0.1224 on the 100-day MA. If bulls can push DOGE through this resistance, $0.130 could be within reach in the short term.

On the other hand, if selling volumes increase and a bearish breakout follows, sellers can expect to encounter bulls at $0.1132, the lowest price DOGE hit on March 7th. If bears can push DOGE through the wave of buyers at $0.1132, then $0.1109 or low could be within reach in the short term.

Shiba Inu (SHIB) has been trading in an increasingly narrowing range since March 7th. Volumes continued to drop all day, and on March 8th, volume thinned out significantly. 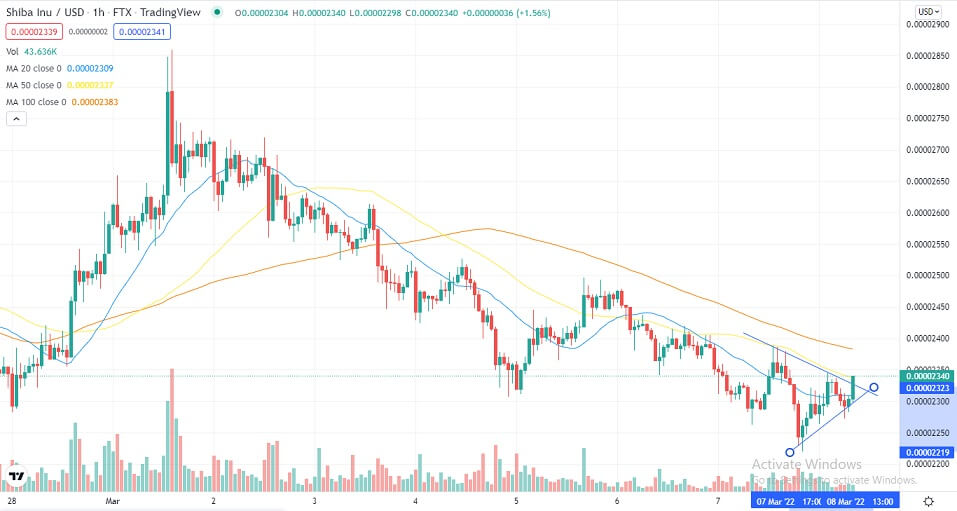