The Ripple price fell back in the red during the ongoing session, as it struggled to push past the 50-day SMA. XRP had ended the weekend on a bearish note, dropping by 5.50% on Sunday. The price continued to drop on Monday, slipping below the 20 and 50-day SMAs and falling to $0.70 before recovering on Tuesday and rising to $0.72. The 50-day SMA acted as resistance, pushing XRP down the ongoing session.

The Ripple price started the previous week in the red, registering a marginal drop on 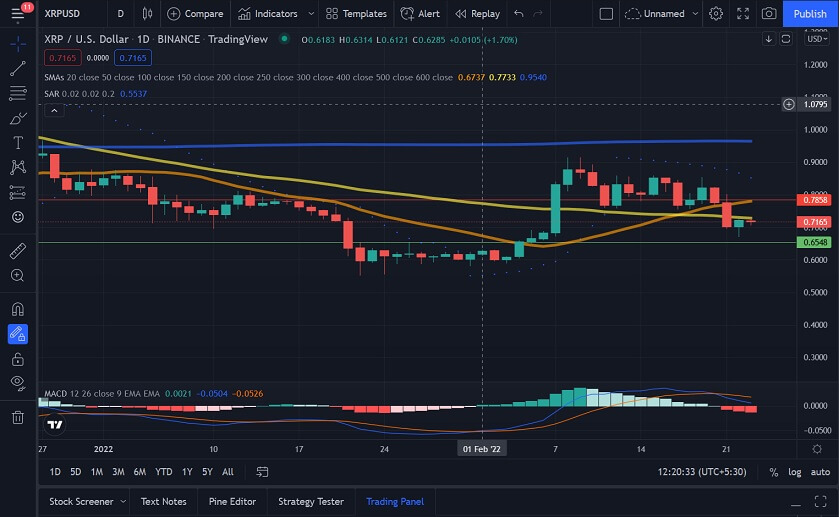 The Ripple price continued to push higher over the weekend, rising by almost 5% on Saturday. However, the price fell back in the red on Sunday, falling by 5.50% and settling at $0.77. Monday saw the bearish sentiment persist as XRP fell by almost 10%, dropping below the 20 and 50-day SMAs and settling at $0.70. The price recovered on Tuesday, moving to $0.72 but was unable to move past the 50-day SMA and fell back marginally during the ongoing session.

The 4-hour Ripple price chart shows us that XRP had dropped to $0.76 on the 18th. The price pushed up from this level, rising to $0.79 before dropping to $0.77. XRP made a strong recovery from this level, surging past the 20 and 50-bar SMAs and settling at $0.083 on the 19th. However, XRP turned bearish after reaching this level and dropped back significantly, falling below the 50 and 20-bar SMAs and dropping to $0.77 on the 21st. XRP pushed up marginally from this point but fell back significantly, dropping below the 200-bar SMA and settling at $0.67. The price recovered from this level and pushed up to its current level of $0.71.

We can see that the MACD and Parabolic SAR are bearish, but if XRP can push higher, we could see them flip to bearish.

Recent developments in the Ripple-SEC lawsuit have suggested that Ripple might be on the winning side for now, as it won several key motions that could be critical in proving its fair motion defense. Namely, the court ruled in favor of Ripple last week to unseal two key documents that the company claims will shed light on how the agency classified XRP back in 2012 when it first came into circulation.

In a recent podcast, attorney Joseph Hall expressed sympathy towards Ripple’s due process argument, which claims that the company was not given fair notice that its actions were deemed illegal even as it had been operating since 2012. He added:

“I’m not sure what the SEC is planning on proving through the XRP litigation either… I continue to be perplexed why the SEC decided to bring that case… Their entire regulatory project could be basically shut down they lose all their merits here, and I think there’s a pretty good chance that they will lose all the merits.”

However, who the case turns in favor of is yet to be seen as the preceding months have mostly been marked several discovery disputes and delays from both parties, which Hall referred to as “little skirmishes” in the bigger scheme of things as any major rulings have yet come out.

Notably, the case has now become bigger than the two parties involved, as over 65,000 XRP holders have joined the proceedings under attorney John Deaton.

Looking at the Ripple price chart, we see that XRP is marginally down during the ongoing session. If XRP is unable to move past the 50-day SMA, we could see it drop to $0.70. However, if the price is able to recover, we could see it push past the SMA and move towards $0.75.

How To Buy Ripple And Where?