The Ripple price has been unable to push to $1 and is currently at $0.92, with buyers and sellers looking to control the session. XRP had registered a significant increase on Thursday, as the price rose by over 4% to $0.99. However, with the 50-day SMA acting as resistance at this level, the price registered a sharp drop of over 8% on Friday, slipping below the 200-day SMA. XRP recovered on Saturday, rising by 1.60%, but fell back in the red on Sunday, dropping to $0.92.

The Ripple price started the previous weekend on a fairly bearish note, registering a marginal drop on Friday. XRP made a strong recovery on Saturday, rising by nearly 4% and then rising by 0.99% on Sunday to end the weekend at $0.83. Monday saw XRP continue to push up, as it moved above the 20-day SMA and settled at $0.87. Tuesday saw a significant jump, with XRP rising by nearly 8% and settling at $0.94, before pushing above the 200-day SMA on Wednesday and settling at $0.95. 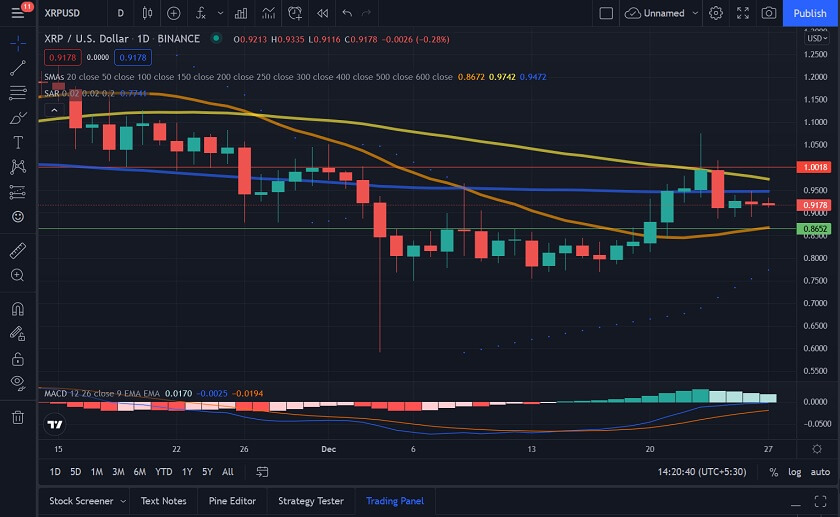 After rising to $0.95 on Wednesday, the Ripple price continued to push up and rose to $0.99 on Thursday. However, at this level, the 50-day SMA acted as resistance, and the price fell back significantly on Friday, dropping by over 8%, slipping below the 200-day SMA and settling at $0.91. The weekend saw XRP recover on Saturday, rising by 1.60%, before falling back into the red on Sunday and ending the weekend on a bearish note. The current session sees XRP still at $0.91, with buyers and sellers vying for control.

We can see that the Parabolic SAR is currently bullish, but if the price drops, we could see it flip to bearish. 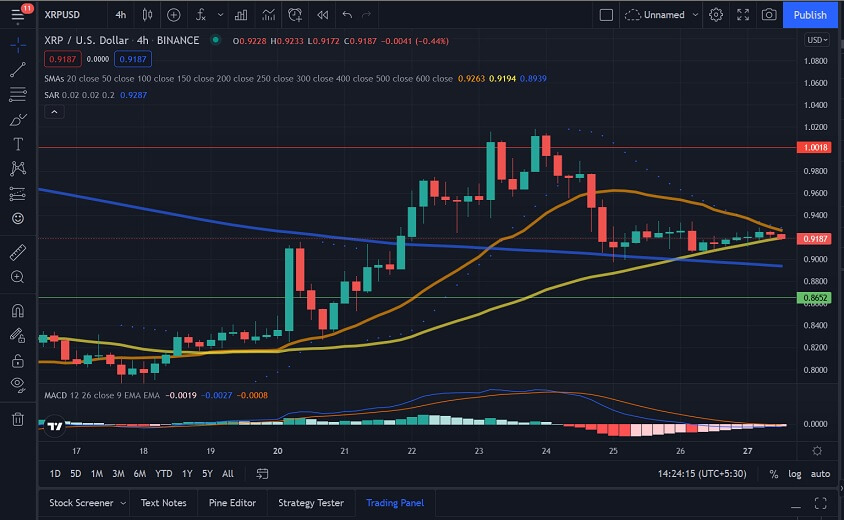 The 4-hour Ripple price chart shows us that XRP had surged to $0.90 on the 20th. The price fell back from this level, dropping to $0.83. With the 20-bar SMA acting as support at this level, the price pushed up significantly, moving above the 200-bar SMA and settling at $0.97. The price stayed at this level for the subsequent few sessions before rising to $1.01 on the 23rd. XRP could not stay at this level and fell back significantly, dropping back below the 20-bar SMA and settling at $0.91 on the 25th. The price rose to $0.91 before falling back to $0.90 on the 26th, where the 50-bar SMA acted as support. The price rose to $0.92 and then dropped to its current level of $0.91.

The Ripple price chart shows us that XRP has fallen back during the current session. If sellers retain control of the session, then XRP could drop to $0.90.