Bitcoin Price Prediction: The Outlook For 2022 And Beyond

Bitcoin (BTC) has been at the forefront of decentralized cryptocurrency from its outset. As the first cryptocurrency to be designed and set up, Bitcoin has been ahead of the game. Hundreds of crypto coins and alternative digital currencies have been created to try to live up to Bitcoin’s exceptional performance. However, none of them has been able to catch up so far and Bitcoin is predicted to go even further in 2022.

The attraction of Bitcoin has always been its separation from the centralized ways of trading that are used globally. The peer-to-peer technology has no need for banks or national authorities to be involved, the transactions that are made are validated by the network as a whole. Anyone can set themselves up to mine bitcoin, or be involved along the routes of creating, buying and selling.

This has lead to a revolution in the global financial market and has created some staggering investment opportunities. Investors are asking themselves how high Bitcoin will go and if it will still go up in 2022. The world is waiting to see what the biggest name in cryptocurrency will do next.

Bitcoin: The Beginning Of Defi

By setting out to be the first digital coin that could function as a fully decentralized currency, Bitcoin triggered the beginning of the decentralized financial market (Defi).

There is no central authority deciding the rules and regulations of bitcoin, or controlling how it is used. One of the other key features of Bitcoin’s set-up is the lack of a central server owned by a central company, instead, bitcoin’s transactions are peer-to-peer. In the place of a central storage system, there is a ledger distributed publicly that anyone can choose to save.

The administration of the Bitcoin system is done by high-level miners who have the necessary technological skills to do so.  However, anyone can create a bitcoin address and open a bitcoin wallet to use as their own virtual form of a decentralized bank account.

Even though Bitcoin was initially set up by one ‘person’ going by the name Satoshi Nakamoto, control was transferred to Gavin Andresen in 2010. Andresen was also set on Bitcoin being a decentralized blockchain and continued promoting this idea within bitcoin.

After Bitcoin pioneered this way of working, the Defi market has exploded, with endless new cryptocurrencies being created and added to its marketplace. However, Bitcoin is still miles ahead when it comes to the values that its coins are achieving and the money made by investors. Now that Bitcoin is reaching new heights, investors are wondering if there is still more money to be made with Bitcoin.

Created by Hal Finney in 2004, the reusable proof-of-work (PoW) system is how Bitcoin verifies its transactions. Finney was an immediate user of Bitcoin when it was launched in January 2009.

While the PoW protocol used by Bitcoin is a long process, which requires a lot of energy to complete, it is very useful to users of Bitcoin. The PoW system makes it extremely easy for verification to take place. Therefore it is vital to the security and openly verifiable system that Bitcoin aims to uphold.

The ‘Segwit’ update, which began being rolled out in 2016, was a crucial step for Bitcoin. The scalability of bitcoin improved and there were strategies put in place to keep transaction fees low. Transactions themselves were easier and quicker to make which made bitcoin more attractive to possible investors.

In 2017 the upgrade to segregated witness (Segwit) software was finally fully integrated into the bitcoin blockchain system. This was great news for current investors as there were several spikes in stock price after this point.

However, this also led to forks in the blockchain which created some of the offshoot crypto coins which are also functioning in the Defi market, with some investors deciding to back these crypto coins instead of the core bitcoin. However, it is still the main bitcoin (BTC) that is the most successful and has seen the best returns.

When Bitcoin users attempt to make a transaction, they decide how much bitcoin to send and who they are going to send it to. However, there are also transaction fees to think about. The miners of bitcoin process transactions for the other users. With any industry, the more you are willing to pay, the better the service you get.

However, the amount that you are willing to pay is not the only issue, the storage size of the transaction also factors in and this helps to prevent a bidding war pushing up the fee price constantly. This is good news for users and investors. 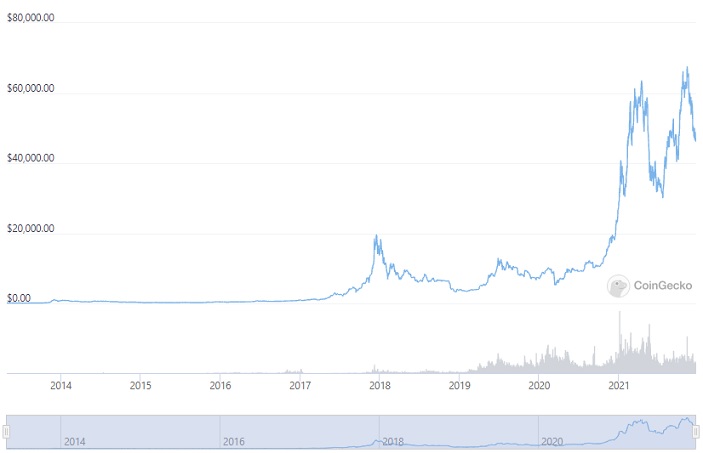 Initially, after its introductory movements, Bitcoin saw resistances and sideways trading patterns for a sustained period. These resistances can also be seen in the coins which were launched later on. Bitcoin did not move past this difficult trading period until 2017 when the trading pattern shifted dramatically.

From this point onward Bitcoin has experienced extremely bullish trading cycles. Although the bearish periods tend to follow the peaks, Bitcoin is still seeing extremely rapid growth. The upward trajectories have been steep in the most recent trading period and if this level of expansion continues, Bitcoin will still be a good investment going forward.

Will Bitcoin Rebound From The Latest Correction?

Bitcoin’s trading patterns were extremely bullish in 2021, reaching an all-time high of $68,529. This exceeded expectations, given that this was over double the price at the beginning of the year which sat just below $30,000 per bitcoin. However, as was seen with the December 2017 peak and the spikes across June and July 2019, a correction followed. 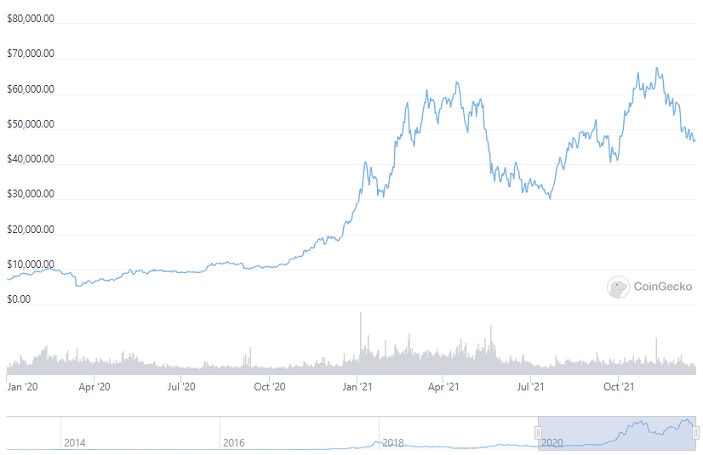 After Bitcoin exploded at the end of 2020, remaining extremely bullish into 2021, it was expected that a correction period would eventually begin. The peaks had been substantial, and so the corrections were also quite drastic. Bitcoin almost halved in value over a matter of weeks during the mid-may drop.

However, this is still not a bad position for Bitcoin to occupy. At a current price of $41,674 at the time of writing, the leading crypto is still outcompeting all other cryptocurrencies in value. Bitcoin is also up more than 50.9% this year to date. This may not seem like much, however, given the massive downward trajectory caused by the correction, positive returns this year overall is a good sign.

Some experts believe that the Bitcoin correction has been proportionate to the overall trading pattern, and so is not a reason to be put off investing in Bitcoin. Delta.app Chief Executive Nicholas Van Hoorde has said:

‘A correction would be healthy for sustained levels of growth and setting up for another bull run, again exceeding the previous one and after a shorter time interval of flat levels.’

This school of thought does not see the recent drop as a reason for prolonged worry. Instead, the correction is considered a sign that Bitcoin is on the right track and will be back to its exceptional growth within the next couple of months.

Throughout its lifetime, Bitcoin has been extremely difficult for experts to predict. The initial trading patterns did not demonstrate the surges that Bitcoin has seen from 2017 onwards. So far in 2021 Bitcoin has reached its highest peak and also seen its steepest drops.

Investors are keen to work out if this is a just dip in a longer bullish period and if the highs that were recently seen will be dwarfed by new peaks. However, some analysts fear that the recent correction will spell the beginning of a bearish cycle. Both of these theories look to predict when the next bull market will begin, and whether it will be in 2021 that we see the next peak.

There are significant numbers of experts who feel that the next peak will reach highs of $100,000 per Bitcoin. These same experts also think this will occur within 2022. This predicts that the bullish market will continue now that the correction period has taken place.

Out of the panel of analysts who were recently surveyed, a few decided that the highs in 2022 could reach $120,000 per BTC. As institutional investors continue to drive up the price of Bitcoin, it is forecast that a bullish trading period will return within 2022.

Predictions For Bitcoin In 2022 And The Future

With lots of factors at play, the forecast for Bitcoin remains positive in 2022. There is some dispute over how high the coin will go this year. Paul Ennis, a member of the panel who met to analyse the trajectory of bitcoin said:

‘Institutional investment will continue to drive the Bitcoin price up, but $100,000 is a psychological barrier that even institutions will find too high.’

Ennis felt that $100,000 could not be achieved in 2022. However, many of his fellow panel members felt that this was a realistic value for Bitcoin to reach in the second half of 2022. This type of surge from the current Bitcoin price of $45,482 would result in huge gains for new investors, despite the high coin cost compared to others in the sector.

The same group of experts have stated that they predict Bitcoin (BTC) to reach highs of $360,000 by 2025. This would be an increase of over 800% compared to the current market value. These extreme estimates are causing investors to reconsider Bitcoin despite the high initial costs. Bitcoin is still a tempting choice given that the possible returns are so great.

Josh Fraser was one of the few panel members who felt that Bitcoin would rise to hit $1 million before the end of 2025. Fraser stated:

‘It's a simple matter of supply and demand. Demand will only continue to increase while supply diminishes’

Given this anticipated expansion, even smaller-scale investors feel that they can profit from buying Bitcoin. By purchasing satoshis, rather than whole bitcoins, smaller-scale investors can jump into the Bitcoin market without having to raise the full coin price. One satoshi is 100 millionth of a bitcoin. This is allowing investors to scale down the amount of money they would like to invest, given that Bitcoin is by far the highest valued coin in the Defi market, while still taking advantage of the predicted surges.

Ways to Make (or Lose) Money With Bitcoin (BTC)

How Much Power It Takes to Create a Bitcoin

15 Reasons Why You Should Invest in Bitcoin Today