After trading in a narrow bearish channel all weekend, altcoins show signs of a breakout on March 7th.

The crypto market was bearish for most of the weekend. This saw major altcoins turn red, though selling volumes were low all through. The result is most altcoins were confined in narrow bearish channels on March 7th, with a few of them showing signs of a breakout. The big question now is, is a marketwide breakout imminent? Let’s dive deep into charts of the top 7-cryptocurrencies for answers.

Binance coin (BNB) selling volumes dropped at the start of the weekend. The result was a consolidation above the channel support at $367.4 throughout the weekend. On March 7th, Binance coin bounced off the $367.4 support, and bullish momentum was on the rise. 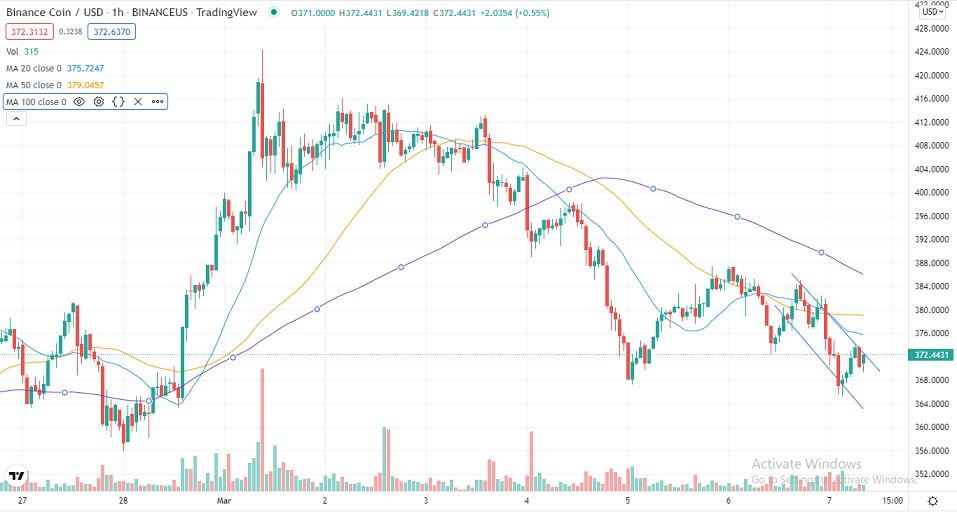 If bulls sustain momentum, they can expect a strong fight from bears at $379.0, on the channel’s resistance level. If bulls can overpower bears at the $379 resistance, it would be an indicator that buyers are firmly in control. Bulls' next target would be at $386.7 on the 100-day MA, a price level where bulls can expect a major fight from bears. Overpowering bears at the 100-day MA would indicate that bulls are clearly in control, and the rally we saw towards the end of February could continue in the week.

On the other hand, if bears take control of the market, they can expect a strong fight from bulls at the $367.4 support on the lower channel. If bulls get overpowered, the next target to the downside would be at $360.7 on February 28th. If bears push through the $360.7 support, prices below $350 could be tested in the short term.

XRP (XRP) was in a bearish channel in the weekend and was making lower highs all through. 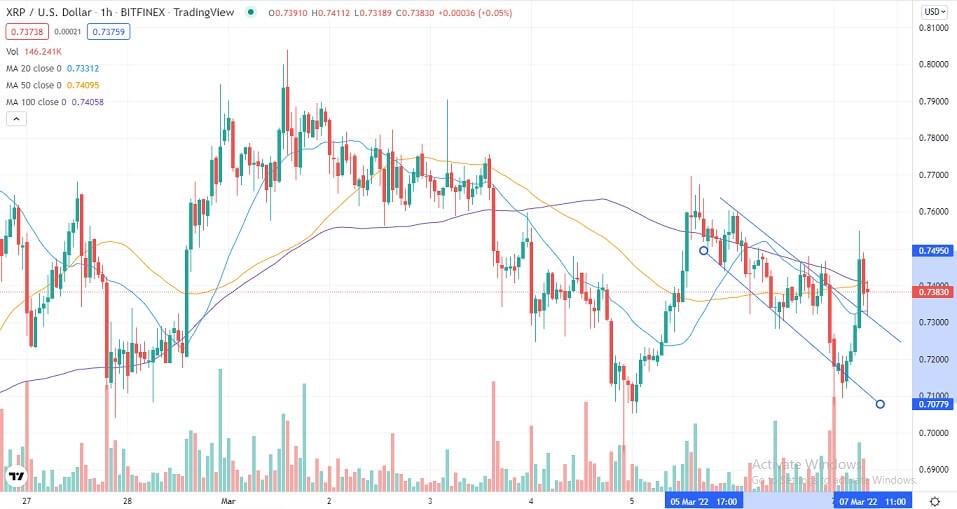 However, after hitting the channel’s latest support at $0.7133 on early March 7th, bulls fought hard, and with buying volumes rising, a bullish reversal followed.

Bulls didn’t even encounter much of a fight on the channel resistance at $0.7395, which also happens to be aligned with the 50-day MA. If buying volumes continue to rise, bulls can expect some resistance at $0.7689. Fighting off bears at $0.7689 would open the way for prices above $0.80.

On the other hand, if the current bullish momentum drops and bears take control, they can expect a huge fight from bulls at $0.7395 on the 50-day MA. If bulls lose at $0.7395, then XRP could continue trading in the bearish channel where it has been trading all through the weekend. 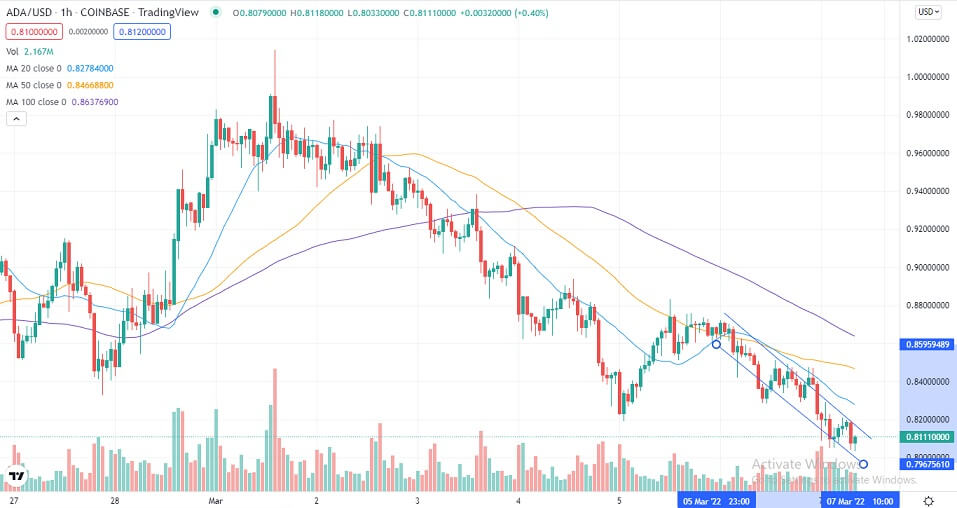 However, if bulls lose the fight at the $0.819 resistance, a reversal could follow. In such a scenario, bears can expect a huge fight from buyers at $0.804 on the lower limit of the current trading channel at $0.805. If bears overpower buyers at this level, there would be little to no support for the day. In such a scenario, prices below $0.78 could be tested in the day.

Avalanche (AVAX) was trading in a bearish channel throughout the weekend. On March 7th, AVAX bounced off the lower limit of the current support level and was gaining upside momentum. 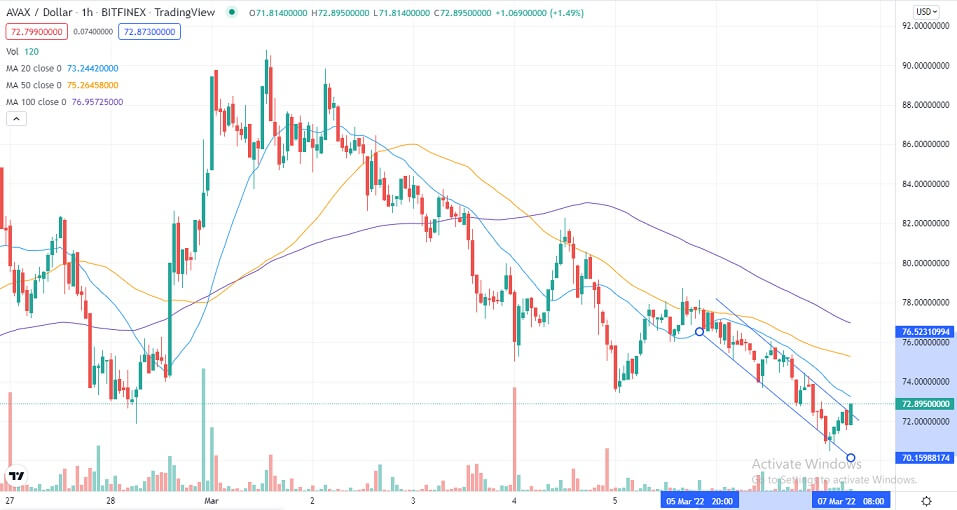 If bulls sustain upside momentum, they can be expected to face a huge fight from bears at the upper limit of the current trading channel at $73.18. If bulls can push AVAX through the $73.18 resistance, the 50-day moving average at $75.28 would be within reach. Breaking this price level would see prices above $76 come within reach and signal the beginning of a short-term uptrend.

However, if bulls lose the momentum they have gained early in the week, AVAX could drop back to the lower limit of the current channel at $70.99. Bears can expect to face a huge fight from bulls at $70.99. If they can overpower bulls, it would mark a continuation of the current selloff, albeit at a more accelerated rate, with prices below $65 easily within reach.

All through March 6th, Terra (LUNA) was trading in a bearish channel. The trend continues on March 7th, with LUNA now trading at $80.03 on the channel resistance. 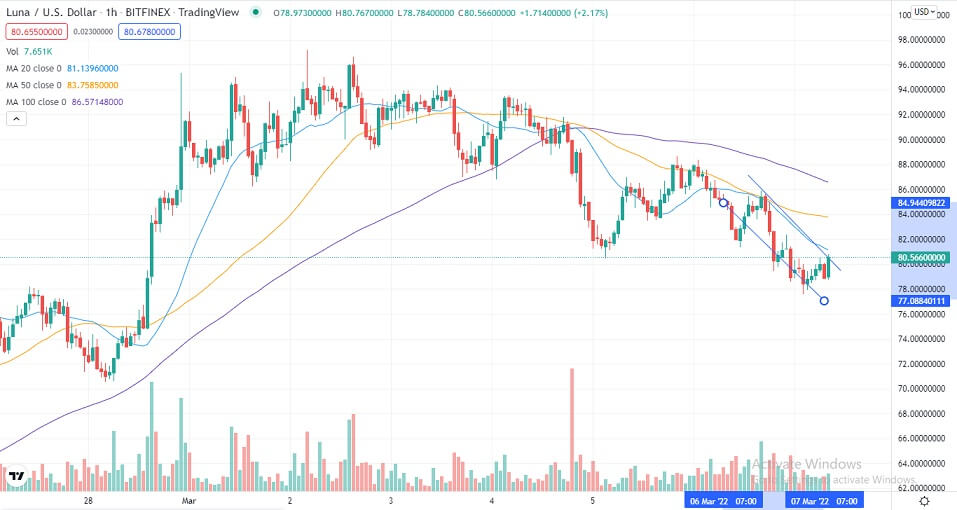 While bulls are facing a huge fight from bears at the $80.03 resistance, if they win, $83.76 on the 50-day moving average would come into focus. If the bulls push LUNA through $83.76, then a bull rally can be expected in the short term, with $90 as a key short-term resistance.

However, if bulls lose the fight at the $80.03 channel resistance, bears too can expect to find it hard to push through the channel support at $77.51. If bears can overpower buyers at $77.51, it would mark the beginning of a short-term bear market, with weekly support at $70.78 in focus.

Dogecoin (DOGE) was trading in a bearish channel throughout the weekend. However, on March 7th, Dogecoin bulls started gaining momentum, though they faced strong resistance from bears at $0.1199. 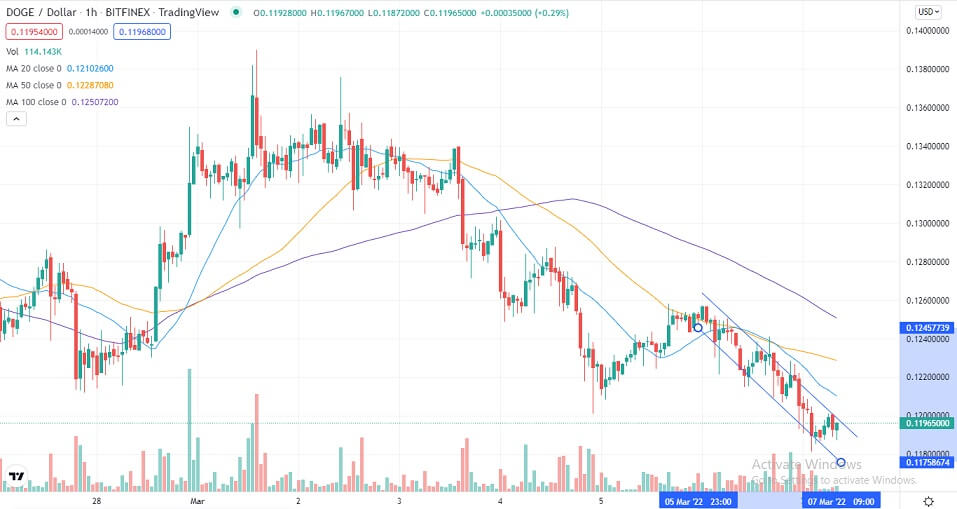 If bulls can fight off the resistance at $0.1199 and rally through it, it could mark the beginning of a short-term bull trend. In such a scenario, bulls could push Dogecoin towards $0.1228, which is another key level where bears could put up some resistance on the 50-day MA. If bulls can overcome this resistance, then prices above $0.128 could become a reality in the short term.

Shiba Inu (SHIB) was trading in a bearish channel on March 6th. The same trend continued on March 7th, with bears pushing Shiba Inu towards the channel support at $0.00002283. 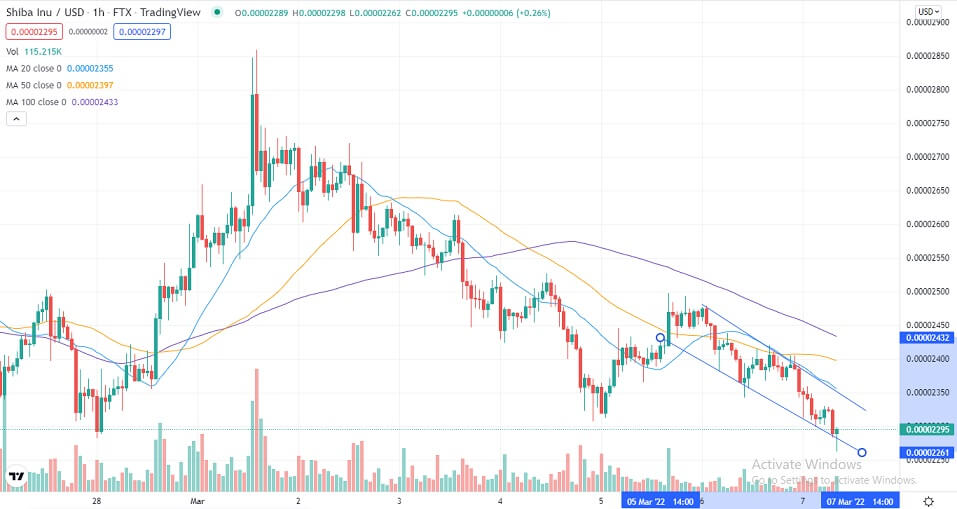 However, if bulls hold up strong and can reverse the price direction at $0.00002283, they too can expect major resistance from bears on the upper limit of the current trading channel at $0.00002324. If bulls can manage to break the $0.00002324 resistance, it could mark the beginning of a bullish reversal and the potential for SHIB to test prices above $0.00002416 in the short term.