The Dogecoin price is currently up by over 5%, as it moved past $0.150 during the ongoing session, continuing to push higher as the price stages a recovery. DOGE had ended the weekend on a positive note as well, ending the weekend at $0.142. DOGE fell back on Monday, dropping by 3.31% to $0.137, before recovering and rising to $0.143 on Tuesday, registering an increase of over 4%.

The Dogecoin price was extremely bearish at the start of the previous week, as it slipped below the 50-day SMA on Monday, falling to $0.170. Tuesday saw DOGE continue to drop, this time slipping below the 20-day SMA and settling at $0.164. The price remained in the red on Wednesday and Thursday as well, falling by 1.82% and 4.20%, respectively. Friday saw DOGE register a significant drop, as the price fell by over 8% and settled at $0.142. 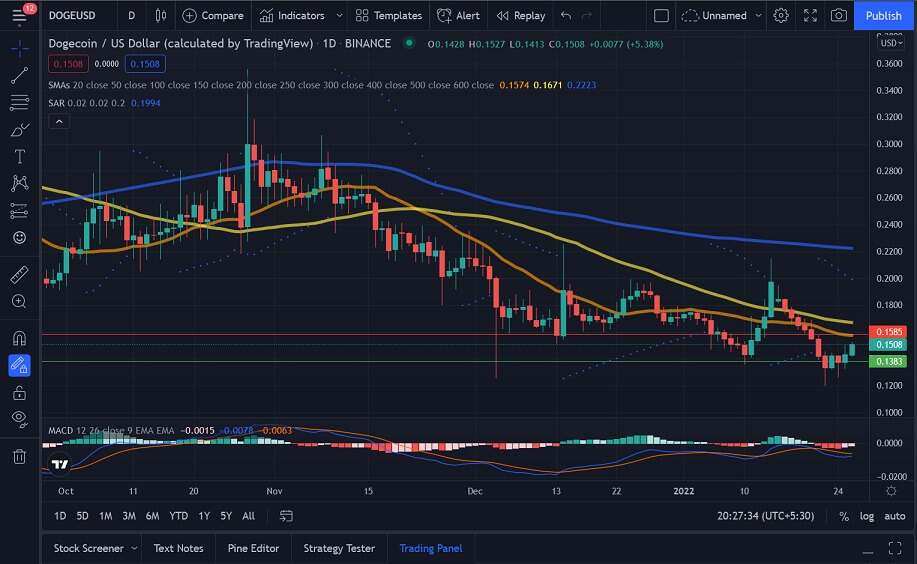 The Dogecoin price continued to drop on Saturday, as it fell by over 6% and settled at $0.133. However, DOGE could make a strong recovery from this level, as it pushed up by nearly 7% on Sunday, ending the weekend at $0.142. DOGE fell back in the red on Monday, dropping by 3.31% and settling at $0.137 before registering a recovery on Tuesday and moving to $0.143. The current session sees DOGE at $0.150 as buyers look to push the price towards $0.155.

The MACD is currently bearish, but if DOGE can continue to push higher, we could see it flip to bullish.

Looking at IntoTheBlock’s IOMAP for the Dogecoin price, we can see that DOGE has strong support at around $0.138. At this price level, over 15,000 addresses have bought more than 6 billion DOGE. 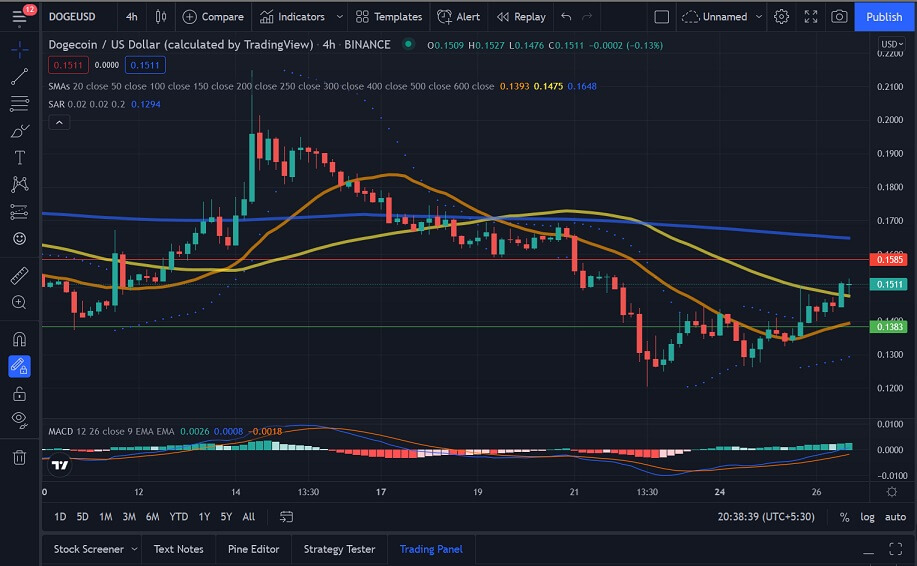 Fast-food giant McDonald’s appears to be facing backlash after its recent response to Tesla CEO Elon Musk. Per earlier reports, the billionaire asked the Chicago-headquartered corporation to accept Dogecoin. In return, he promised to eat its Happy Meal on television.

McDonald’s has seemingly backed away from the offer by tweeting that it will accept Dogecoin if Tesla accepts “Grimacecoin.” The name of the made-up crypto was inspired by Grimace, a purple anthropomorphic creature that started appearing in McDonald’s commercials in the early 1970s.

It intended to be a mean-looking character with four arms, which would steal kids’ milkshakes. However, Roy Bergold, McDonald's creative officer, told QSR Magazine that “Evil Grimace” had turned out to be a failure because it was too scary for kids.

Just minutes after the McDonald’s tweet, someone created a token called “Grimacecoin” on Binance Smart Chain that pumped more than 261,000% within hours before erasing its share of its gains. Due to the low barrier to entry, BSC has become a hotbed for quick pump-and-dump projects.

The Dogecoin community was largely dissatisfied with the response. Many pointed to the fact that it took the company’s marketing team over 10 hours to come up with such an offer. Dogecoin co-founder Billy Markus commented that the Grimacecoin tweet was a textbook example of how to make something fun unfunny.

Glauber Contessoto, who made headlines as a self-proclaimed “Dogecoin millionaire” last year, tweeted that the restaurant chain had “fumbled an incredible opportunity for a terrible joke.”

Looking at the Dogecoin price chart, we can see that DOGE has registered a significant increase during the ongoing session and is up by nearly 6%. If the current sentiment persists, we could see DOGE push to $0.155 or push even further to the 20-day SMA at $0.158.