Is Bitcoin In A Bubble That’s About To Burst?!

Many people like to make predictions about the price of Bitcoin. It feels like there is another new price prediction every other day.

Most likely many are going to be wrong, and many have already been wrong.

Amongst these predictions, many believe that Bitcoin is in a bubble it’s price could burst at any minute.

But are the critics right?

In this article, we’ll look at the argument for and against Bitcoin being in a bubble that could burst at any moment.

What constitutes a ‘bubble’?

A bubble is when an asset reaches a sustained rise in price above its supposed normal market value.

There are two stages to a price bubble; formation and burst.

Two of the most famous recent examples was the dot-com bubble that occurred in the 1990s or the housing bubble in the US in the 2000s.

The dot-com bubble was largely the result of investors speculating companies that operated largely on the Internet.

The result of the bubble was a crash where many of these companies failed.

The US housing bubble started in 2006 and is seen by many as a precursor to the 2008 recession.

Funnily enough, the 2008 crash is often seen as one of the primary reasons Bitcoin was created in the first place.

The argument that Bitcoin is in a bubble 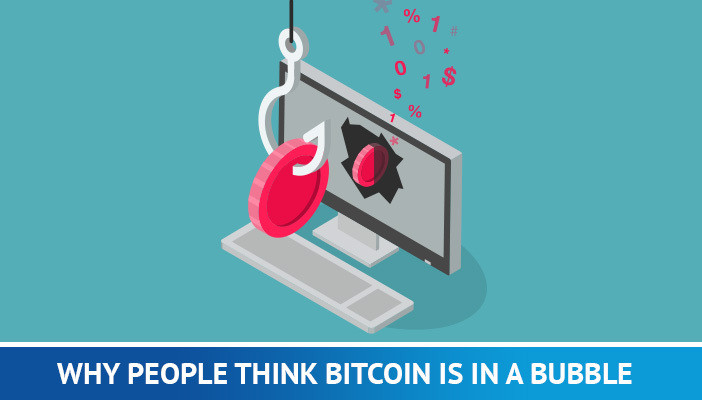 Many of the people that argue that Bitcoin is in a bubble tend to think that it is overvalued already.

Much of their reasoning that Bitcoin is in a bubble is related to its vulnerabilities, particularly in comparison to fiat currency and there are a lot of points to be made.

Some, on the extreme side, even believe that there is a Bitcoin bubble because it shouldn’t be worth anything.

For starters, a lot of computational power is put into use to create Bitcoin in comparison to fiat currencies.

There are many estimates about how much power is used to create Bitcoin. Some as extreme as the entire country of Columbia, a country of 50 million people.

This, of course, is highly problematic and needs to be resolved.

Another argument that Bitcoin is in a bubble that will likely burst is that people hold it and don’t spend it. This is problematic because everyone thinks the value will keep going up.

This makes Bitcoin dysfunctional and not work as a currency as originally intended.

Critics also bring up the point that although many involved in cryptocurrency dislike central banks, they do have some use.

Bitcoin also has a fixed supply of money and cannot be expanded or contracted if there is an emergency.

Critics also point out that Bitcoin is not solely decentralised.

A lot of the control is down to the miners and we cannot be sure if we can trust these people to act without self-interest. We don't know anything about them as we do with central banks.

Bitcoin still has an image problem

Supposedly, up to 25% of all Bitcoin users are associated with illegal activity and countries are already cracking down on Bitcoin.

This doesn’t help Bitcoin’s image or help its acceptance among the population.

Finally, critics also point out how hard it is to use Bitcoin. Most likely, if Bitcoin becomes more popular, there will be many intermediaries to help people use it.

If such services do not emerge, it can be problematic to Bitcoin’s acceptance and could indeed mean that it is overvalued and there is a Bitcoin bubble. 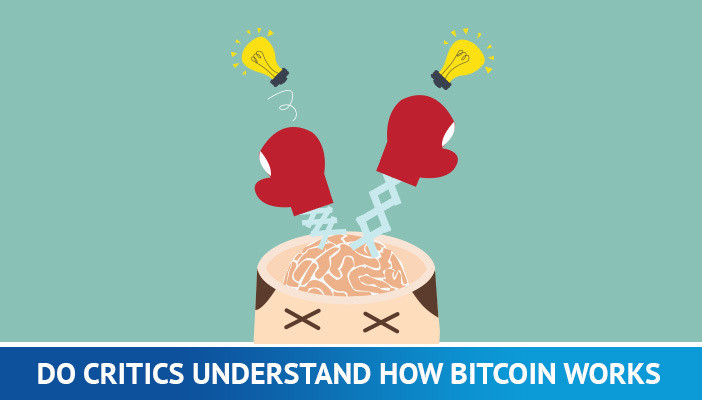 Many critics do not know about the work that is done to secure Bitcoin and the economy that has emerged around Bitcoin to use it for their businesses.

However, critics who do not understand how Bitcoin works also need to be taken into consideration.

Cryptocurrency enthusiasts need to understand what issues need to be cleared up.

One argument that repeatedly comes up is that Bitcoin is dangerous because you can get hacked and lose it.

There is a good deal of misconception here. Yes, people have been hacked and lost their Bitcoins, but the Bitcoin network has never been hacked.

It is solid and the only way to destroy it is with a 51% attack.

Another argument that there is a Bitcoin bubble that is going to burst relates to it being too volatile to be used every day. That said, people overlook that Bitcoin is still in its very early days.

Some compare Bitcoin’s price rise to the Tulip Mania bubble that originated from the Netherlands in the 1600s.

Tulip Mania is often regarded as the first-ever speculative bubble. Like with other bubbles, the price of tulip bulbs reached extraordinary levels before bursting.

Arguably, there already was a Bitcoin bubble in 2017, by December it almost reached the price of $20,000 before bursting and sliding down dramatically to around $6,000 by February 2018.

And before that, Bitcoin had survived previous crashes, such as in 2011 where prices reached a major milestone of $29 before plummeting to $6.50 later in the year.

Both events should be looked upon as reminders of how much money can be lost when speculating on Bitcoin or any cryptocurrency.

It could also be looked at as a sign of what is normal for Bitcoin. It is, after all, the most volatile asset to have existed and will likely go through many phases that people label as ‘bubbles’.

Is there a cryptocurrency bubble? 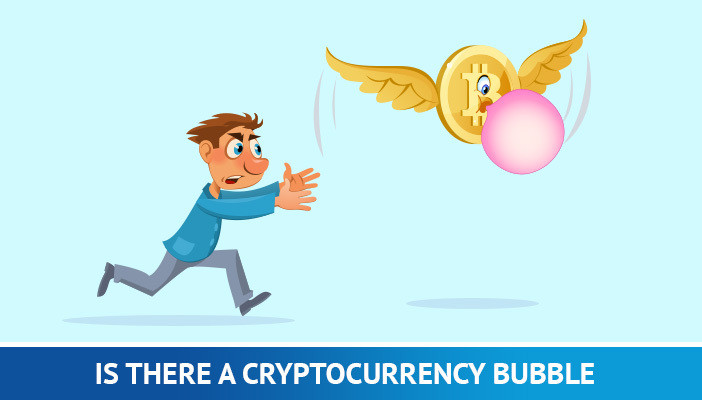 There is an argument that although there may not be a Bitcoin bubble, there is a wider cryptocurrency bubble because there are so many different cryptocurrencies.

Bitcoin used to be 80% of the cryptocurrency market, now is only 1 third.

It may be possible that if there is a cryptocurrency bubble, Bitcoin might not survive and could be replaced.

Currently, there are over 2,000 different cryptocurrencies, many of which are aiming to achieve similar things.

In recent years there has been a rise in ICOs. For some, this could be a sign that a bubble is emerging. In 2019 so far, over $2 billion has already been raised, most of which privately.

Some compare it to Railway Mania bubble that happened in the UK in the 1840s.

At this time in the UK, many railway companies were popping up and many speculators investing them.

While a lot of money was raised, many of these companies failed for a variety of reasons including poor financial planning and some were even fraudulent.

The result of the Railway Mania bubble was that many of the railway companies crashed and disappeared while more robust companies survived and thrived.

It is likely that in the future, there will be a cryptocurrency crash and many of these cryptocurrencies will disappear.

That’s why as a trader, you should be very careful what cryptocurrencies you choose to invest in.

The argument that Bitcoin is not in a bubble 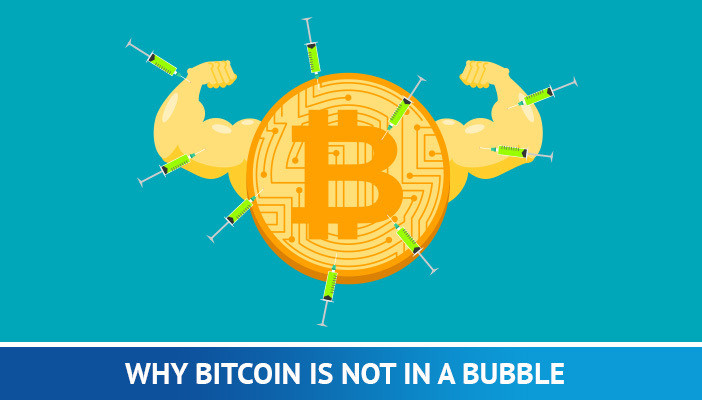 Bitcoin has strong backing from many in the cryptocurrency world. Many of which believe Bitcoin will be the future of money and there isn’t a Bitcoin bubble.

Many people within the cryptocurrency community disagree that Bitcoin is in a bubble.

One of their most promising arguments has its roots in the financial crash in 2008 and the lack of trust of bankers that emerged.

They argue that we need to move away from central banks who have too much control and can manipulate currencies, citing that many policies of countries haven’t worked.

Bitcoin is created is more transparent, people can see the progress. Although many of us don’t know who is behind Bitcoin’s development, we can openly see the changes they make.

In regards to the argument that Bitcoin is used for illegal activity; the US dollar is preferred as it is harder to trace than Bitcoin.

Some of these people who believe that Bitcoin is undervalued and there is not a Bitcoin bubble point towards the Bitcoin halving that will take place in May 2020.

This is where the block reward per mined block will be halved, slowing down Bitcoin creation and increasing the price.

The German bank, Bayerische Landesbank recently predicted that Bitcoin will likely reach a price of $90,000 after the halving.

John McAfee, on the other hand, made a more outlandish prediction that after the halving, Bitcoin may reach $1 million.

And then there are true Bitcoin supporters, like the Winklevoss twins, who believe that Bitcoin is undervalued until it reaches the same valuation as gold, which is $7 trillion.

While it is still quite early to say, these prices are not so unrealistic if you believe that Bitcoin will become a universal way to pay one another and is not in a bubble that will likely burst.

Their opinions are strong, but they also must consider the argument that Bitcoin might be in a bubble.

Though they likely disagree with it, the points critics make do hold some weight.

It is also possible that after the halving, Bitcoin’s price may plummet as many will sell at a high price.