While the coronavirus pandemic brought the world economy to its knees in 2020, most cryptocurrencies seemed to thrive. 2021 proved as an even more exciting year for the crypto market as top coins doubled their value in a matter of months.

For instance, the price of Dogecoin has skyrocketed in the first FIVE months of 2021. DOGE, which apparently started as a joke, is on an uptrend that might see it hit $1 in the next few years. While the coin has had its share of price volatility, the recent bull run has placed it on the radar of investors and the media.

In May 2021, DOGE achieved its current all-time-high price of $0.7376 and subsequently pushed its market cap to about $80 billion. And while both the price and market cap have had a minor pullback, Dogecoin still shows signs of a promising growth that might soon prove previous price predictions to be severe underestimations.

In this guide, we will be looking at some of the most recent Dogecoin price predictions by experts. But before we go into the details, let’s have a brief refresher of what exactly Dogecoin is and why it is unique.

If you want to invest in Dogecoin quickly and easily, with 0% commission, check out eToro Exchange!

What is Dogecoin (DOGE) and Why is it Unique? 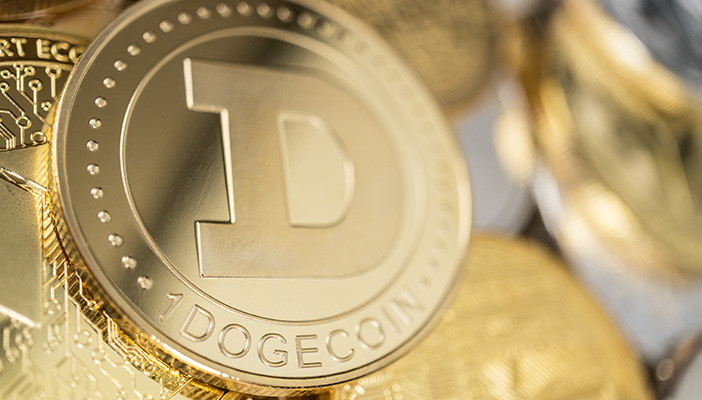 Cryptocurrencies like Ethereum and Cardano pride on introducing new features and functionalities to blockchain technology. This is done to attract potential users and increase the adoption of these cryptocurrencies. However, the creators of Dogecoin didn’t see the need to be different in a big way.

Instead of introducing some revolutionary new tech, they introduced something far more unexpected; a joke. Dogecoin’s symbol is a Japanese Shiba Inu dog which is a famous internet meme. According to the manufacturers, they wanted to create a  lighthearted and fun digital currency.

However, with an active online community and endorsements from public figures like Elon Musk and Snoop Dogg, Dogecoin’s growth has been anything but a joke. Like most cryptocurrencies using blockchain technology, Dogecoin is a peer-to-peer and open-source digital asset. It is based on the Litecoin blockchain and uses a proof-of-work algorithm.

This means that Dogecoin works mostly like Litecoin. For instance, it also uses public and private keys to allow users specific access to information on the blockchain. It can also be mined just Litecoin and Bitcoin.

Despite these similarities, Dogecoin has a few features that make it quite unique and different from mainstream cryptocurrencies. For instance, it doesn’t limit the number of tokens in circulation. This is common practice with deflationary cryptocurrencies like Bitcoin.

So, instead of trying to beat inflation like other digital currencies, Dogecoin relies on it. This means that new coins can still be mined even if their value has dropped. These new coins will then replace lost ones to maintain a steady supply of about 100 million active Dogecoin tokens.

This approach works for Dogecoin because its users treat it more like fiat currencies. That is a medium of exchange as opposed to an investable asset like Bitcoin.

So, to maintain this strategy, the creators target to keep 100 billion dogecoin tokens in constant circulation. This means that issuance will continue even after hitting this mark. As a result, enough coins will be in circulation to compensate for lost coins and wallets.

Dogecoin in 2021 - Everything You Should Know

Like we already mentioned, Dogecoin started 2021 on a bullish note, surging more than 1,600%. Already the coin is attracting attention and increasing its user base. Most of Dogecoin’s success these past few months has been fueled by celebrity mentions and an active online community.

In particular, Tesla CEO Elon Musk’s obsession with Dogecoin has helped push the coin’s price by a big margin. The business mogul who recently invested $1.5 billion in Bitcoin thinks Dogecoin deserves more attention than it is getting right now.

In some of his tweets, he refers to Dogecoin as “ the people’s crypto” and even went ahead to brand himself the unofficial Dogecoin CEO.

Apart from Elon Musk, several other celebrities have thrown their support behind Dogecoin to help it maintain stellar growth. In a satirical way, rapper Calvin Cordozar Broadus Jr (Known commonly as Snoop Dogg) tweeted support for Dogecoin, sparking more attention around it.

American musician Gene Simmons has also directly promoted DOGE to his followers. Gene claims to have made a six-figure investment in Dogecoin.

Now, investors are worried that there might be a repeat of the same if Dogecoin’s price grows exponentially based on celebrity endorsements. However, this is not the only thing fueling DOGE’s growth. The meme-based coin has an active online community that has been tenaciously trying to drive its price to the $1 mark.

In particular, TikTok users have made several attempts to raise Dogecoin’s value by convincing others to buy shares in viral videos. For instance, in early July last year, Dogecoin’s volumes surged 683% after a video asking people to buy went viral.

As a result of these promotions by fans, celebrities, and enthusiasts, Dogecoin has seen substantial growth and even institutional adoption. Just recently, Forbes reported that Mark Cuban’s Dallas Mavericks will now be accepting DOGE as payment. In early March this year, BitPay, the largest provider of crypto payment services in the world, announced that it will start allowing its merchants to accept Dogecoin as payment.

What does this success mean for the future of Dogecoin? Will the price eventually hit $1 in 2022?

Before we can try to predict where Dogecoin will be, let’s look at where it has been.

Dogecoin started as a joke. So, it was practically worthless at the beginning. When it was initially listed on cryptocurrency exchanges in mid-December 2013, it was trading at $0.000255. About one month later, this price increased to $0.002306, representing almost a 10-fold increase.

While this looked like a promising start and the joke was finally being accorded some seriousness, it wasn’t. In a few days, Dogecoin had a major crash that plummeted its price to the lower point. The coin didn’t recover for about three years.

Later, in 2017 as the cryptocurrency market was wallowing in the newfound Bitcoin craze, most other coins started to rise. Dogecoin was one of them.

This correction paved the way for an exponential growth that saw DOGE hit a new all-time high of $0.018773  at the beginning of January 2018.

However, there was a market-wide crash in the first quarter of 2018 that saw most coins fall. Dogecoin wasn’t spared, and by April, it was trading at around $0.002725. Interestingly, this turned out to be a blessing for DOGE.

Again in September, the coin had an upside spike that took it to $0.006539. This also didn’t last long, making the cryptocurrency finish the year on a bearish note.

However, in January 2021, Dogecoin joined the rest of the cryptocurrencies in breaking new records. In a dramatic move, it jumped from $0.004892 on 1st January and hit $0.010203 three days later.  Towards the end of January, the price settled at $0.011815 in preparation for one of the biggest spikes in Dogecoins history.

Although the price has since dropped, it has shown a good promise for 2022, and this might just be the right time for new investors to jump in.

Check Out: How to Buy Dogecoin - Beginner’s Guide

As we have seen from the price history, DOGE has had a lot of price crazy price swings in the past few years. This makes it hard to predict its price with utmost certainty.

However, using past data and current trends, several experts have come out with predictions that could hit towards a most likely direction. Dogecoin has grown over the years to become one of the most promising cryptocurrencies. Already, it has started 2021 on a high note, and we expect the coin to hit new highs as the year ends.

Most expert predictions don't seem to think Dogecoin will hit anywhere close to the $1 this year or even next year. Digital Coin Price also thinks DOGE will finish this year at $0.21. LongForecast predicts that Dogecoin will trade between $0.08-0.10 in the last month of 2022.

There doesn’t seem to be much price difference between 2021 and 2022, according to the predictions we have. For instance, TradingBeasts predicts that DOGE will start end December at $ 0.27, which is almost double its current trading price.

LongForecast is a bit less optimistic and believes that Dogecoin will trade at $0.10 by December 2022.

This is close to Trading Beast’s prediction of $0.30 at the end of 2023. Digital Coin Price, on the other hand, is a bit less optimistic and believes that the coin will be trading at around $0.27 towards the end of the year.

Dogecoin Price Predictions 2024-2025 and Beyond

Dogecoin has already shown potential for wild volatility, and predicting its price for the next five years would be an equally wild gamble. However, to give you an indication of how the price might move in the coming years, we will look at some predictions below.

If you look at the predictions from the three platforms we’ve been mentioning in this guide, you can see that there is a very subtle price difference from year to year. The same goes for between 2024-2025.

Despite the slow rise, we believe that the price of DOGE will be much higher than it is right now by 2025. This price growth will be fueled in part by the fear of missing out as more people seek to buy cheaper cryptocurrencies.

By 2025, also, there will generally be broader acceptance of cryptocurrencies, and people will be more willing to invest than now.

This will likely increase the price of Dogecoin as well as its market cap. Predictions from LongForecast suggest that there might be a drop in the most part of 2024, with the price playing between $0.20 and $0.16 between January and May. It will then rise to $0.24 in October before closing the year at $0.28.

Will Dogecoin Ever Hit $1?

This is a question that lingers on the minds of most people looking to invest in DOGE. So, none of the speculators thinks the coin will be hitting $1 anytime in the future. However, as Dogecoin grows, it will attract more and subsequently increase its value.

In particular, as the coin becomes more advanced and adds new features, it will see wider mainstream adoption. Some analysts like the European Business Review believe that the cryptocurrency might hit this mark as soon as the end of 2021. That is about a 1,717% increase from the current price, which is a pretty huge leap for a coin as young as Dogecoin.

In the same vein, Mark Cuban believes that Dogecoin can reach $1 soon enough if Maverick’s fans use it for transactions frequently enough.

Despite the tremendous support from online fans and celebrities, we don’t see Dogecoin bothering the $1 mark any time soon. The massive support thrown behind Dogecoin right now might also be its downfall. Most experts have also warned against new investors basing their investment decisions on celebrity endorsements.

This should, however, not deter you from investing. We have already seen that Dogecoin has been on an uptrend since it was launched in 2013. The frequent price swings make it a great option for traders who are looking to make quick short-term gains.

Conclusion: What is the Future of Dogecoin?

Most prediction charts show that the Dogecoin price will remain bullish until 2025 and beyond. While these predictions are not anywhere near accurate, they show that this coin has a promising future. So, although the cryptocurrency might not achieve $1 anytime soon, it will keep increasing, and soon enough, it will be profitable enough for those who are investing now.

If the current support from celebrities and the online community does not fizzle out, we might see a stronger Dogecoin in the future. Otherwise, we will keep watching the price movement closely to see if any of the predictions we singled out will stand.